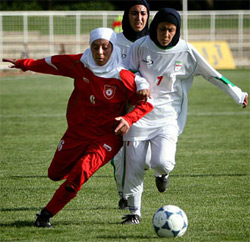 A cleric in Iran announced Friday that broadcasting women pictures engaged in sports activity is forbidden by Islamic laws.

Namazi, who was conducting the Friday sermon in the city of Kashan emphasized that women should only attend their homes.   He asked members of the mullahs’ parliament to “set occupational priorities for women and send them back to their main job (housekeeping).”

He complained about some state-run television stations broadcasting women participating in shooting sports while all filming crew and bystanders were men.  He emphasized that “women sports event should not be televised at all.”

Iranian women sports is already under much pressure due to strict state-imposed Islamic laws.