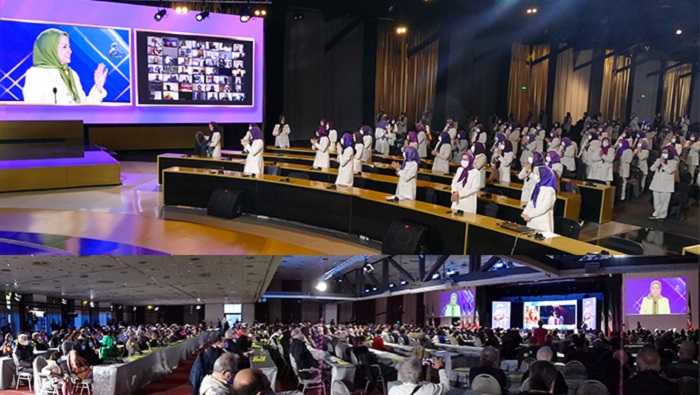 Thousands of women commemorated the contribution of Iranian women in the struggle for freedom in Iran and equal rights around the world during a conference on International Women’s Day. Politicians, MPs, women’s rights activists, and members of the Iranian Resistance spoke at the conference in Berlin, Ashraf 3 (Albania), and online on recent events in Iran and the globe, as well as the role women may play in freeing Iran from tyranny.

Mrs. Maryam Rajavi, the President-elect of Iran’s National Council of Resistance of Iran (NCRI), spoke on the resilience of Iranian women in the face of the mullahs’ misogynist rule.

“For Iranian women, International Women’s Day is a day of pride and honour. Because they have stood against the monsters of misogyny, coercion, pillage, and oppression this year, as they have for the preceding four decades,” she remarked.

Mrs. Rajavi further stated that the mullahs do not reflect the Iranian people and their hard-line beliefs on human and women’s rights.

“Horrific and growing atrocities against Iranian women have nothing to do with the culture of the Iranian people. They result from the regime’s enmity towards women and its medieval nature. 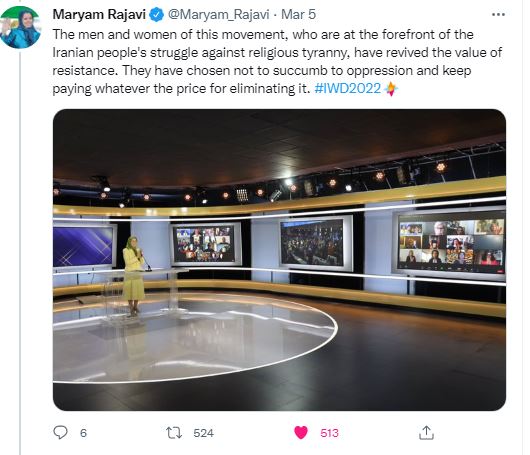 “Despite their tremendous suffering, the two-year tragedy of the Coronavirus pandemic, which resulted in half a million deaths, and widespread poverty and hunger, Iranian women now talk not of their sadness, but of their optimism for freedom and equality.” They speak not about their pain but of a future that is not a distant dream and is achievable.

“Only if there is a true democracy with freedom and equality once the mullahs are overthrown will Iran be protected from the sad experiences of the past.” And it’s up to you, the women, to make it happen.”

“In Iran, women and girls are the primary targets of the sexist machine. It would have been simpler if they had stayed at home. However, they did not do so. Iranian women, on the other hand, have chosen a different route. They have refused to adhere to the regime’s demands. They have turned into a force for change in Iran,” she said.

Thorning-Schmidt also emphasized that women’s rights in Iran are contingent on the overthrow of the mullahs’ dictatorship and that the movement leading to that end is led by a woman.

“[Iranian women] understand that their rights will only be realized if Iran undergoes political transformation.” “They understand that under a misogynist system, they will not be able to achieve their goals,” she stated. “It’s notable that the NCRI is chaired by Maryam Rajavi, a Muslim woman. Her ten-point plan is a blueprint for the rest of the world to realize that Iran has a democratic future. This initiative should be supported by all democratic governments across the world.”

Ingrid Betancourt, a former Columbian senator, and presidential candidate discussed the progression of women’s roles in the Iranian Resistance, from oppression to being the driving force for change in Iran. 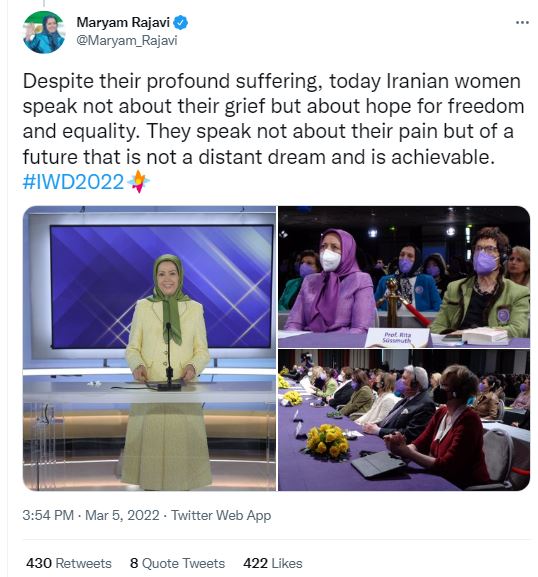 “Iranian women have come to a crucial realization: they can only gain their rights if Iran’s system changes. As a result, they must participate in the opposition to the regime. But they’ve taken it a step further. They understand that in order to achieve their aim, they must assume responsibility at all levels, including political.”

Betancourt emphasized that Iranian women’s resistance must be bolstered by a robust global strategy that holds the regime accountable for its numerous crimes and hostile actions.

“It is past time for the international community to come together and act. We demand that the United Nations Security Council, the US government, and European nations abandon their policy of appeasement toward Iran’s regime. In the case of Iran, the world must abandon its humiliating strategy of negotiating a nuclear deal with the dictatorship. It’s past time for us to unite ourselves with the masses. Supporting the Iranian Resistance and the MEK is a duty of the world.”

Horrific & expanding atrocities against Iranian women have nothing to do with the Iranian culture. They result from the regime's enmity towards women and its medieval nature. #IWD2022https://t.co/bo7rFjnbBe pic.twitter.com/xIz96ZhoYX