Fatemeh R., 21, was hanged in Gohardasht Prison last week, according to state-run media, around December 9. 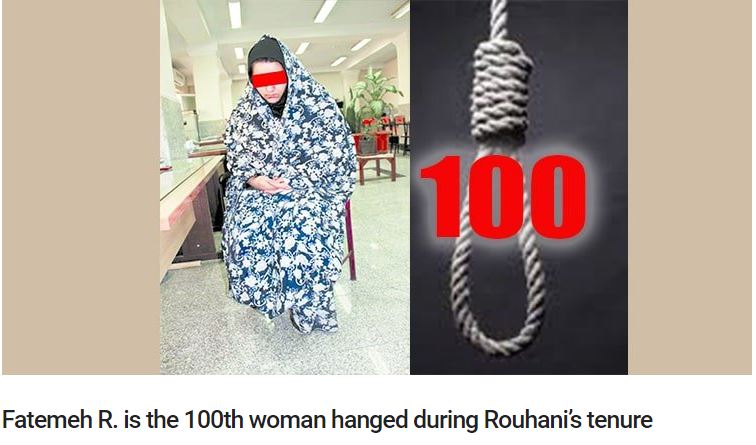 Fatemeh R. was sentenced to death for killing her husband during an argument in 2015 when she would have been just 17. Under international law, that is too young to receive the death penalty, but the regime cares little for the rights of women and children.

Most Iranian women who commit murder do so in self-defense or defense of their children against a violent husband. The Iranian Regime’s failure to categorize murders based on their degree or the intention means that many vulnerable women who were victimized by the regime have been re-victimized by the mullahs when they are executed.

Fatemeh R. is the 100th woman executed by the regime since Rouhani’s presidency began and the third in just one week, after Maryam, 32, was hanged with her husband in the Central Prison of Mashhad, on December 8, and Somayyeh Shahbazi Jahrouii was hanged in Sepidar Prison of Ahvaz on December 4.

There are unconfirmed reports that another two women were hanged on December 4 in Gohardasht Prison, which sheds light on the fact that these numbers should be considered a minimum due to the secrecy of the regime around executions, many of which are carried out secretly.

The Iranian Resistance calls for the death penalty to be abolished in Iran, especially the executions of minors.

They said: “Execution and the death penalty are among the main instrument of the clerical regime to preserve its rule. This is why it cannot step back from executions even during a time when the general public in Iran is at the height of their discontent.”

In related news, Javaid Rehman, the United Nations Special Rapporteur on the situation of human rights in Iran, said that “conservative estimates indicate that at least 173 executions have been carried out” so far in 2019.

He also expressed deep concern over the use of the death penalty in Iran, telling the UN General Assembly’s human rights committee he has “credible information” that there are at least 90 children currently on death row in Iran.