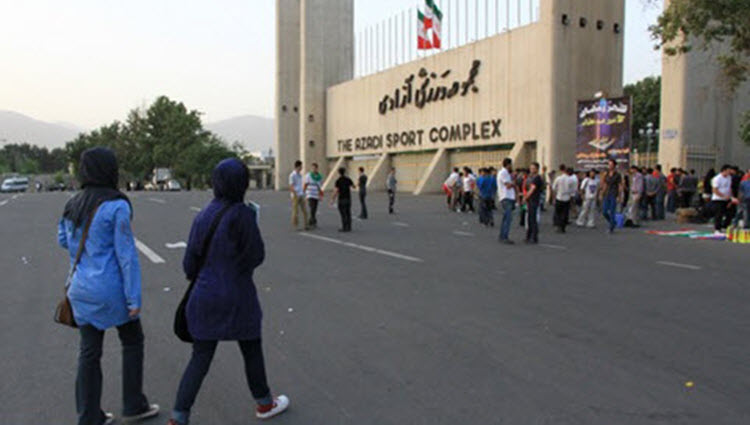 Remarks made by Iranian regime leader Ali Khamenei that encouraged Basijis and soft-war officers to make independent decisions and take action at their own will, are having heavy consequences, and engendering an atmosphere of fear.

A warning has been issued by the coordination council of the Iranian Ansar-e Hezbollah that they will counter women’s presence in sports stadiums with Khamenei’s order to “fire at will.” These vigilantes have announced that allowing women into stadiums is against the Islamic law.

According to state-run ILNA news agency, the head of the coordination council of Ansar-e Hezbollah, Hossein Allah-Karam, published the statement on his Instagram account and wrote, “This organization has complaints about the Ministry of Sports and Youths which has illegally and unlawfully dragged hundreds of women and girls as spectators to the recent volleyball games of men.” The statement was dedicated to ‘Friday Prayer Hezbollah Students’.

On Friday, June 16, the Hezbollah students issued a declaration to the speaker of the mullahs’ parliament (Majlis), Ali Larijani, in which they demanded prohibition of women’s entry to stadiums to watch the World League Volleyball games in Tehran. It reads in part, “Please order tending to this matter, otherwise,\a we would have to prevent it based on Khamenei’s ‘fire at will’ order….”

\aThey have released photos of their gathering to collect signatures, and called on the regime’s judiciary to deal with the issue of allowing women into stadiums to watch volleyball matches. They warn that otherwise, they will be forced to act based on clause ‘M’ of Khomeini’s will. Clause ‘M’ encourages regime forces to directly go into action and take necessary measures if state bodies fail to properly deal with situations considered to be against regime’s interests.

After a limited number of women attended the first game played by Iran’s national volleyball team, the wife of the team’s medical doctor, Shaqayeq Yazdani, wrote in her Instagram, “Unfortunately, entry to the stadium has not been sanctioned for all women and only the wives and families of members of the national volleyball team whose names have already been registered by the federation can enter after providing proper identification.”

In the meantime, Ahmad Alamolhoda, Mashhad Friday Prayer Imam and Khamenei’s representative in the city, said on Friday,  “fire-at-will means not to wait for orders from anyone or anywhere. This (fire-at-will) order clearly defines responsibilities of all bodies, including executive and judiciary ones.” And, Shiraz Friday Prayer Imam, Assadollah Imani, has also spoken about same issue, saying “fire-at-will order is neither weakening state bodies nor the government, but it’s just getting involved in issues which others tend to avoid.”

Supreme Leaader, Ali Khamenei, used the term “fire at will”, in a speech to a group of youths whom he called “officers of the soft warfare,” on June 7th. This was the same day twin terrorist attacks occurred in Tehran. He told the young men that they had permission to “fire at will” to criticize the cultural policies of the government, according to state-run ILNA news agency.