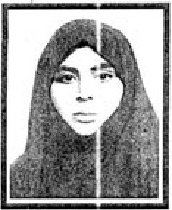 Stop Fundamentalism – Another young girl’s body, who was arrested by the plain-clothes Bassij forces during Iran’s recent election unrest, was found.

Sayideh Pour-Aqayi (Amayi) was the only daughter of Abass Pour-Aqayi (a veteran of the Iran-Iraq war who died two years ago).  She was arrested by Bassij forces in her home in Tehran while participating in the nightly roof-top protests.

Reports indicate that her body was burned with acid to cover-up torture and rape evidence on her body.  She was buried in section 302 of Behesht Zahra Cemetery without the presence of any family members.

Sayideh’s mother identified her body in coroner’s office in south Tehran, twenty days after her arrest, but the body was not released to the mother.  After a few weeks the family was informed that she was buried anonymously in Behesht Zahra.

According to sources, Sayideh was violently raped after her arrest and was then murdered.  Her body was burned with acid from the knees up to cover-up.

There have been many reports of torture and rape of victims by prison grads during the past two months.

Sources also indicate that the family of Sayideh is under extreme pressure to announce that their daughter has died of kidney disease.