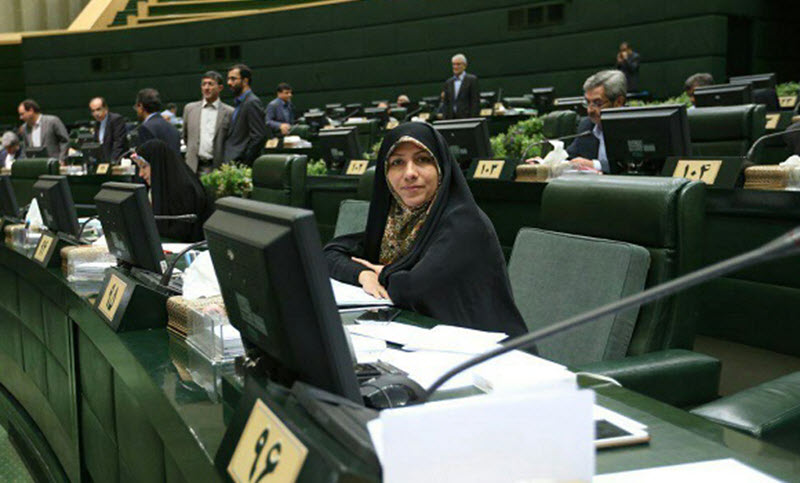 Member of the Majlis, the Iranian regime’s parliament, Nahid Tajeddin, who is allied with President Hassan Rouhani, voiced a concerned view on Monday. “I was thinking about what I should say for the youth from behind this tribune? The same youth, who despite being 40 percent of the Iranian population, 25.3 percent of them have been unemployed in the [Persian] year 2017-2018, according to the data from the center for statistics,” she said.

“I was thinking about what I should say for the women? The very same women who are 50 percent of this society but their share of higher management positions in the country has yet to reach the 30 percent mark set by the president’s office,” she added.

“I was thinking about what I should say from behind this tribune for the people who have not been mentioned? What pain should we talk about that hasn’t been already talked about and what is the remedy for all these pain,” Tajeddin said further. She concluded her speech by referring to the plight of Iranian workers whose monthly wage provides only a portion of today’s living costs.

Tajeddin also warned about factional infightings among the political elite, but didn’t present any solution for the dilemmas the mullahs’ regime.

At the same session of the Majlis, Mahmoud Bahmani, former Central Bank governor and a current Majlis member added to the regime’s growing list of concerns.

“Right now, the middle class and poor people of the society are becoming weaker every day and profiteers, brokers and underground economic activists who see themselves beyond the law have become richer and bolder,” he said. “Nonetheless, the country’s resources and reserves are fourth in terms of oil and second in terms of gas, and first in general terms and we have [just] one percent of the world population and seven percent of the world’s natural resources,” Bahmani added.

“Right now, we have $700 billion of mineral reserves and it isn’t proper that the middle and lower class are living in poverty and some corrupt individuals and profiteers, while we have created the environment, can endanger the livelihoods of the people,” concluded the former governor of central bank of Iran in the open parliamentary session.

As well, Kamaladdin Pirmoazzen warned, “Corruption, nepotism and an increasing distance between social classes, is endangering the foundation of the [1979] revolution and the state.” In referrence to an example of blatant corruption he said, “I was myself on the managing board of the country’s pensions fund and I witnessed how the elite had huge special benefits through subsidiary companies.” He warned, “The more the distance between the government and state with the people increases, the more the regime’s interests are harmed.”

State-run Hamdeli newspaper wrote on June 17, “There is no doubt about the impact of the sanctions on the people’s livelihoods.” The piece reads further, “Polarizing the society, confronting the people for different excuses, unreasonable clampdowns regarding social issues like modesty, music, etc… and totalitarian and biased approaches regarding political organizations… will act like fire on the building of the current domestic integrity.”

Political pundit Alizadeh Tabatabaii warned about authoritarian policies. “You can’t handle a social issue like modesty through physical or legal measures… A bad approach towards issues like modesty will play into the hands of [our] opponents,” he concluded. Tabatabaii is also allied with President Rouhani.