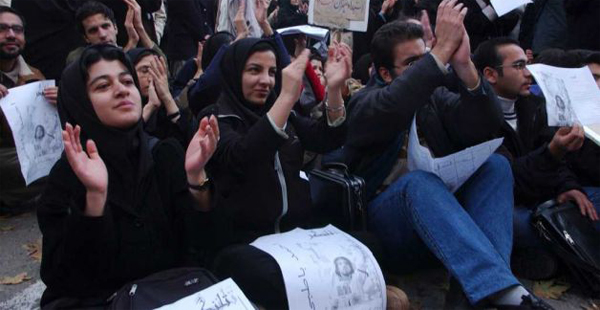 Stop Fundamentalism – HRA News Agency reported Monday that following the new sex segregation measures put in to effect in Iranian universities, female students in the Science and Art University have had to use separate doors to enter classrooms since the beginning of the new school session.

Students say they noticed a thick and dark curtain covering the entry designated to women on the first day of classes.  Security agents hid by the curtain and forced female students to pass through these doors to enter classrooms where they were checked for proper Islamic dress code, say the students.

Reports also indicate that on the first day of school, the university security, in an unprecedented measure, did a physical check of the girls on their entry to the campus.

Also the agents required the students to show their identification cards and those who did not have their ID cards along were refused entry to the university.  When the students protested, the guards responded that they have orders to impose the tight measures.

HRA adds that the degrading behavior of university guards towards students and specially females in this university is nothing new, but with the new sex segregation measures being adopted, the pressures have multiplied.

The fall school session in Iran starts on September 23.