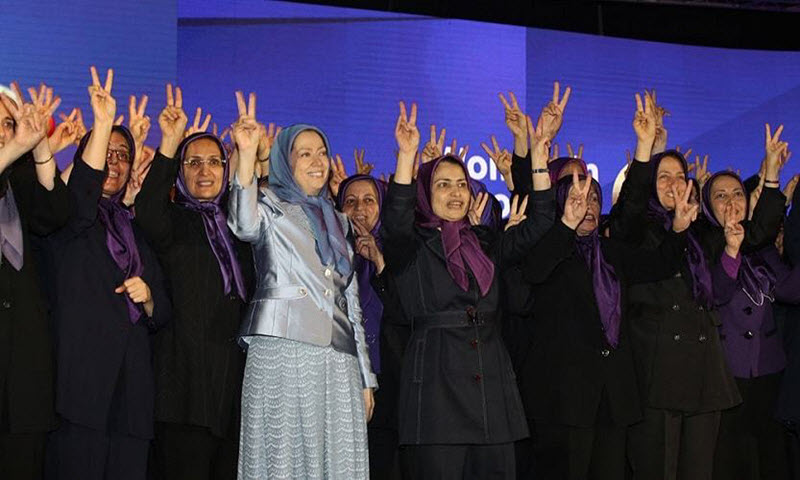 Iranian women play an important role in the Iranian opposition’s struggle against the Iranian regime. Thousands of these women, inside the country and abroad, joined the People’s Mojahedin Organization of Iran (also known as the Mojahedin-e-Khalq, MEK or PMOI) to struggle for freedom and justice. MEK women asserted their powerful determination by resisting against the mullahs’ torturers and executioners. Thousands of these women stood firm to the edge of death and so the Iranian woman became as the symbol of the struggle and resistance against the Iranian religious dictatorship.

Heading these women is Mrs. Maryam Rajavi, the President-elect of the National Council of Resistance of Iran, a woman with a long history of resistance against this regime. She has been involved in the struggle for freedom since before the 1979 revolution in Iran. Because of her activities against the outdated mullahs, her residence in Tehran was attacked by the regime several times. In this regard, in March 1982, the MEK command decided to transfer her to Paris. In Paris, Mrs. Rajavi took part in launching the center of Resistance in Paris, which later became the central office of the NCRI. She also took different responsibilities to grow the capabilities of the Resistance.

Maryam Rajavi’s history with the Resistance

In 1985, Maryam Rajavi entered in the MEK politburo. Thanks to her ability, four years later, the MEK politburo elected her as the MEK Secretary General. Maryam Rajavi led efforts to encourage Iranian women to join the Resistance and express their opposition to the misogynist regime. Eventually, in 1993, the NCRI, acknowledging Mrs. Rajavi’s efforts for growing the Resistance, elected her as its president for the transitional period for transferring power to the Iranian people.

The symbol of the struggle

Many Iranian people know Ashraf Rajavi as the eternal symbol of their struggle against the mullahs’ regime, because she stood firm and proved her endurance and power to her dying moments.

In 1981, when the PMOI/MEK command convinced Mr. Massoud Rajavi, the PMOI/MEK leader, to transfer to Paris, where he could be the voice of the Resistance to the world, Ashraf Rajavi, chose to remain in Tehran as the representative of the MEK leadership. Finally, in February 8, 1982, Ashraf Rajavi and dozens of her comrades died in an unfair attack by the Islamic Revolutionary Guards Corps (IRGC).

Since Ashraf’s martyrdom, she became as the symbol of the struggle against the mullahs’ regime and to honor her heroic struggle, the MEK decided to name their central base in Iraq and also their new base in Albania, Ashraf.

Earlier this month, Ashraf 3, Albania, hosted a series of the international conferences in presence of prominent politicians and policymakers from across the U.S., European Union member states, and Arabic states in support for the Iranian people’s struggle for a free Iran, and therefore, Ashraf 3, new home to MEK members, proved its place as the symbol of the Iranian people’s struggle.