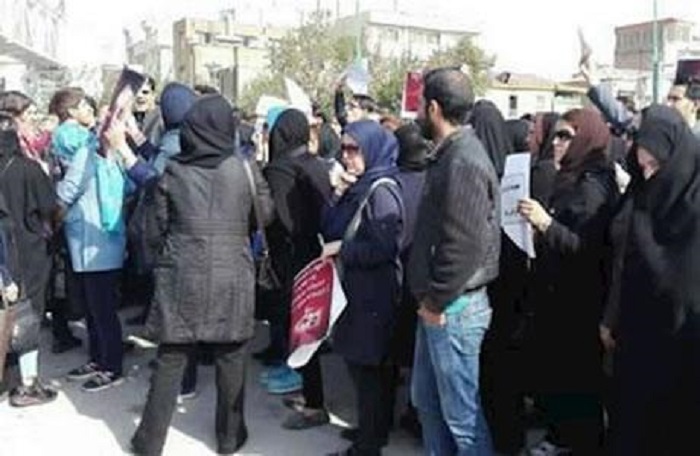 A state-backed expert of the Iranian Regime has admitted on Iranian state television that all protest gatherings have become feminized since January because of the incredible participation of women in protest gatherings.

Mohsen Mahdian said: “Since January, all (protest) gatherings have become feminized. Today, the enemy prefers a woman over a man to be in the scene. The issue has become gender-oriented because the values for attracting attention have totally changed. She is producing new narrations based on a series of new values. You must be able to adapt.”

On Saturday, September 21, a group of residents in Ilam who are stuck living below the poverty line held a gathering outside the Governor’s Office to protest the wholesale suspension of their subsidies by the government of Hassan Rouhani.

While on the same day in Rasht, a group of maimed victims of the Iran-Iraq war and their families held a protest gathering against the discontinuation of their medical aid, protesting that most hospitals refuse to admit them for treatment.

Also on Saturday, a number of people who bought vehicles, which have not yet been delivered, also held a gathering to protest this outside the regime’s Judiciary building in Tehran.

On Thursday, September 19, a group of defrauded clients of the Padideh Shandiz Institute held a protest gathering outside the Governorate in Mashhad to demand the return of their stolen assets. Protesters there held up many banners and placards, but one that perfectly summed up the situation, read: “You gave promises for five years, but did not return our money”.

There were 50 shareholders of Padideh Shandiz Institute, who had been referred to the Governor’s Office of Khorasan Razavi Province in order to follow up on their demands.

Those who were defrauded by this disgraceful institute have been persistently following up in recent years to take back their plundered assets.

It is no surprise that women are heavily involved in these protests and all protests against the Regime because women are the most heavily affected by the Regime’s misogynistic laws. They are denied the right to choose their own education, career, spouse, clothing, time to have a family and so much more.

Iranian women are a huge part of the resistance because, quite simply, they have nothing to lose. They want to overthrow the Regime.