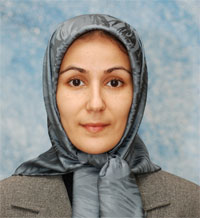 Nima Sharif
Under the rule of the Ayatollahs, Iran has seen one of the darkest periods of its history. But thanks to people like Saba Haftbaradaran, there is light at the end of the tunnel.

The Daily Telegraph story of life and death of Saba Haftbaradaran, a resident of Camp Ashraf in Iraq who died during the April 8 massacre, was both tragic and shocking.  Shooting at unarmed civilians is pure savagery.  There is no justification for that no matter what the Iraqi government and military says or what the Iranian regime alleges the residents of the camp to be.  Nouri al-Maliki will have to answer for committing crimes against humanity.  He must be brought to justice in an international court.

But Saba did not go to Ashraf to confront Iraqis.  Saba was in Camp Ashraf to try to bring freedom to her people and home country, Iran.  The country she had to flee along with her parents when she was only two years old. The country she hardly remembered anything about and she never saw again.

Saba was not alone. All those who died on that day, 8 Women and 27 men, all had a story to tell.  In fact all 3400 Iranian residents of Camp Ashraf do.    The stories are about atrocities of a brutal regime that has ravaged a great country with a great culture and kind people.  The story also portrays great courage and self-sacrifice of those who bravely take bullets in the heart to bring freedom to their land and happiness and prosperity to their people.  A story of love, pride and patriotism that breaths life onto every sole it comes in touch with.

Freedom is worth it.

Legends, heroes, great warriors, they still exist today.  They may have just changed forms a bit in the new era.  But they are surly here.  And don’t expect to see all men.  A new interpretation of a hero for the future is to come.

It is true that freedom has a price.  It is also true that many of us may never be in a position to pay that price. Saba did.  She chose willingly to do so.  That is what makes a leader.

Saba, 29, was one of thirty five residents in Camp Ashraf, and one of 8 women, who were slain on 8 April by the Iraqi forces.  While almost six weeks have passed since the attack, Iraqis are still inside the camp and residents continue to live at gunpoint.  Many of the residents fear another attack to wipe the camp completely clean may be in the horizon.

Meanwhile a European Union plan proposes relocation of the residents to other countries in Europe, North America, and Australia.  While the European Parliament initiative is moving forward, the lives of those who have survived the attack in Camp Ashraf must be preserved.  They are still in danger.

To do that, the United Nations must step in and take responsibility to protect the residents and prevent another bloodbath.

Also as it has been suggested by mainly American sources, a plan to relocate the residents to another location has been proposed.  The plan is inconsistent and meaningless in reality.  It will put the residents more in danger of another massacre rather than solve any intermediate problem. What United States can and should do instead is to stand by the European initiative and also support a United Nations Security Council for temporary protection of the residents until they are relocated to other countries.