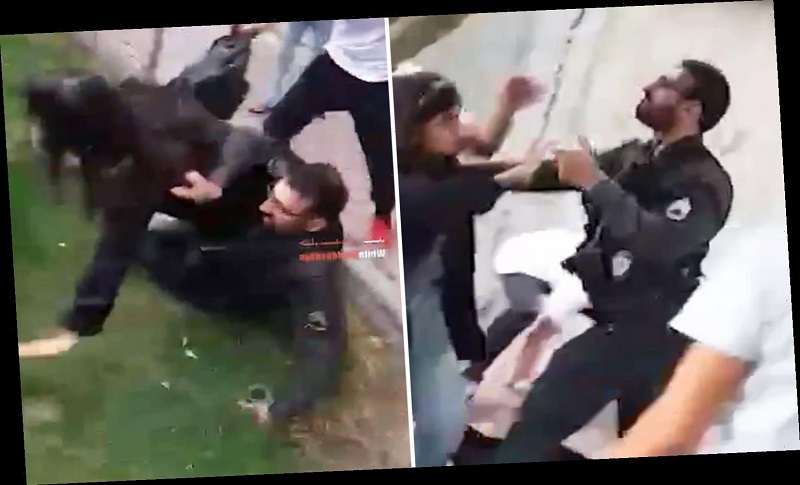 A video published by Britain’s Sun on November 1, 2019, shows an angry male Iranian State Security Force officer roughly grabbing an unsuspecting teenage girl and forcefully flinging her on to the ground – because she wasn’t wearing a hijab.

The video shows the girl was grabbed and shoved by the large, male officer while walking along a street, in broad daylight in front of people in an Iranian street.

After the 1979 revolution, forced hijab was imposed and women are obliged to wear hijab in public.

Iranian women and girls are becoming increasingly defiant of the obligatory dress code and pay the price of standing up to the SSF to express their opposition to the clerical regime’s law imposed on Iranian women against their free will.

According to Amnesty International, women and girls are regularly stopped in the street by morality police and vigilantes.

“Some 2,000 women who wear improper clothing are arrested every day in Tehran and some other provinces,” revealed the State Security Force Commander, Hossein Ashtari in 2016 to the state-run Tasnim news agency on September 29, 2016.

The resolution “condemns in the strongest terms the ongoing repression of women for objecting to compulsory veiling and for exercising their rights to freedom of expression, association, and peaceful assembly; calls on the Iranian Government to respect the freedom of Iranian women to choose their own dress code.”

The resolution of the EP also praised and supported the Iranian women human rights defenders who continue to stand up for their causes, despite the difficulties and personal repercussions they are facing.

Anna Fotyga, an MEP and former Foreign Minister from Poland, commended the women of Iran for their bravery, determination and will, not only for their struggle for women’s rights but for their protests against the regime. She said the main Iranian opposition movement, the National Council of Resistance of Iran (NCRI), was “led by a woman.”

Mrs. Maryam Rajavi the President-Elect of the NCRI emphasized in her platform for a free Iran speaks for freedom for women: