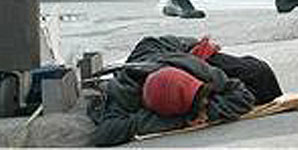 Meanwhile, ILNA news agency reported that according to Reza Jahangeerifard, Deputy of Social Welfare of Tehran Municipality, the average age of women sleeping in the streets is lower now.

Jahangeerifard told ILNA: In the past eight years, most homeless women who slept in the streets of Tehran were of old age, but nowadays we are seeing young homeless women.

The executive director of Social Welfare of Tehran Municipality also stressed that more women are found homeless in the streets and they are surpassing men in numbers.

A psychiatrist in Tehran said: I have been working on this subject for many years. The greatest problem of Iranian women and girls, especially in Tehran, is that their rights are violated by men on many instances and men don’t differentiate between an uneducated and an educated woman; they are insulted the same. It makes no difference to them whether you are a doctor, teacher, artist or a nobody. They easily insult women.

Women and girls earn just a third of men in any job despite the fact that they work harder and are more committed than men. This is getting worse by the day. Iranian women work, study and get promoted but they still have no rights in the society.