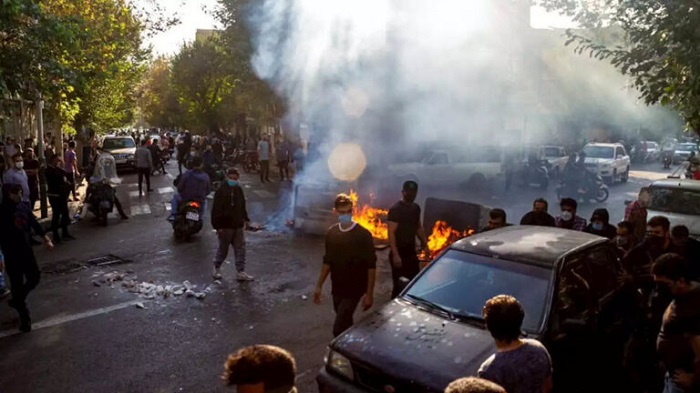 Thousands of protesters are being detained and subjected to torture in the regime’s prisons. Friday saw a well-organized display of anti-regime protests by the brave Baluchi community in the cities of Zahedan, Khash, Pishin, Sar Jangal, and others in southeast Iran’s restive Sistan & Baluchestan Province. Following their weekly Friday prayers, large crowds took to the streets in Zahedan’s provincial capital, chanting slogans such as “Death to Khamenei!” “Death to the dictator!” and “No Baluch-killing state!”

Protesters also showed national solidarity across Iran’s ethnicities by holding signs that read “Kurds, Baluch, Arabs, Azeris are all brothers!” This goes against the regime’s long-standing campaign of trying to sow division across ethnic and religious lines. The people of Iran are united today in one goal: overthrowing the mullahs’ rule.

Protests in Iran have now spread to at least 280 cities. According to sources from the Iranian opposition People’s Mojahedin of Iran (PMOI/MEK), the regime’s forces have killed over 700 people and arrested over 30,000. The MEK has released the names of 565 protesters who were killed.

On Saturday, students at an all-girls technical school demonstrated and chanted anti-regime slogans like “Death to the dictator!” and “Freedom! Freedom! Freedom!” The regime’s security forces eventually attacked them.

Farmers demonstrated in Isfahan once more, demanding that authorities address their concerns about their fair share of water for their lands. Owners of recently closed stores protested outside the local governor’s office in Najafabad, demanding that their stores be reopened.

To prevent protests from taking shape, the regime has sent a large contingent of security forces to Tehran’s Sattarkhan district. Security forces are seen randomly beating and shooting at civilians in videos. Sattarkhan has become a sensitive location for the regime since Thursday, when authorities executed Mohsen Shekari, 23, for protesting in the district.

Despite heavy security, Tehran residents held rallies in a number of locations, including Narmak, Sattarkhan, Naziabad, Jannat Abad, and Shariati Street. Protesters chanted anti-regime slogans and urged fellow citizens to join them in their demonstrations.

December 10 – Tehran, #Iran
Locals are reporting an intense atmosphere in the capital's Sattarkhan district as regime security units are patrolling the streets in large numbers.#IranRevolution2022#مرگ_بر_ستمگر_چه_شاه_باشه_چه_رهبر pic.twitter.com/jEc6hw7GMC

A large protest rally was also held in Gohardasht, west of Tehran, where people gathered and chanted slogans condemning the regime’s brutal repression and execution of protesters.

Iranian opposition President-elect Maryam Rajavi of the National Council of Resistance of Iran (NCRI) praised Iran’s Baluchi community for continuing to fight the mullahs’ regime despite ongoing oppression and cruelty.

“I salute my Baluch compatriots, especially my dear sisters and daughters. Marching in the streets, they paid tribute to the executed protester Mohsen Shekari. Their chants of ‘Death to Khamenei!’ echoed the desires of all the people of Iran to overthrow the regime,” she explained.

I salute my Baluch compatriots, esp. my dear sisters and daughters. Marching in the streets, they paid tribute to the executed protester #Mohsen_Shekari . Their chants of “Death to Khamenei” echoed the desire of all the people of #Iran to overthrow the regime. pic.twitter.com/Gx79J9JpM7