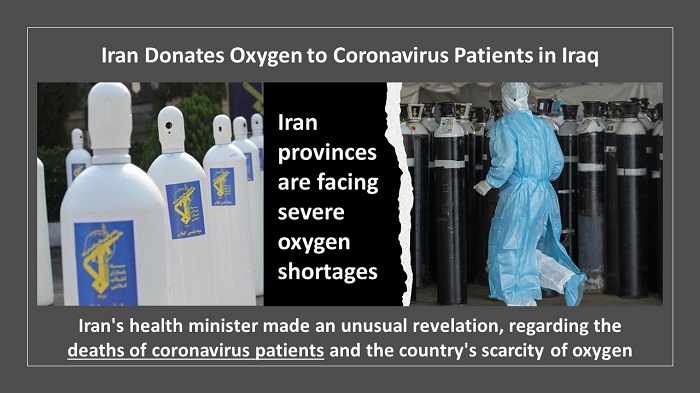 Iran supplying the oxygen needed for coronavirus patients to Basra – Iraq. The National Council of Resistance of Iran (NCRI), and the People’s Mujahedin of Iran (PMOI / MEK Iran), reported that Iran’s health minister made an unusual revelation on September 21, regarding the deaths of coronavirus patients and the country’s scarcity of oxygen.

The situation is a disaster

The state-run news outlet SNN reported on this, quoting the health minister:

“The deaths of 600 to 700 people every day are tragic. I visited nine provinces and visited all of their ICUs. The situation is a disaster. When I went to Imam Reza Hospital, more than 80% of the patients were intubated (threatening and dying coronavirus patients who are intubated in their trachea), which was terrible.

The Basra Health Department reported the arrival of 60-ton cargoes of donated oxygen from the Iranian government to address the demands of coronavirus patients in hospitals.

The Iranian consulate in Basra, the regime’s general efforts, the Hashd al-Shaabi, the Basra Health Department, and a delegate from Khamenei’s office to deploy liquid oxygen tanks to Basra was also mentioned in Iraqi media.

Basra’s Health Director Abbas Khalaf Tamimi told Al-Ahd TV on August 4 that he was grateful for Iran supplying the oxygen needed for coronavirus patients to Basra:

“I express my gratitude to the Islamic Republic of Iraq and its consulate in Basra, as well as the governor of Khuzestan and the Hashd al-Shaabi for delivering the first shipment of liquid oxygen to Basra hospitals. Some of these shipments are also sent to the province of Helleh.

More oxygen shipments to be sent to Basra

“For the Islamic Republic, this is not an unusual news story. I can’t thank them enough, and I expect more oxygen shipments to be sent to Basra. The Islamic Republic sends us 60 tonnes of oxygen every day or every other day, and 100 tonnes more will arrive tomorrow, inshallah.

“This work necessitates a high level of discipline, and the Iranian side is very cooperative with us. This cooperation is not confined to today; our Iranian consular brethren will cooperate in this regard in the coming days. They advise the governor of Khuzestan to work with government parties and the high organization in the next months in order to complete the project by the end of the year.”

“We have coordinated with the governor of Khuzestan regarding the arrival of three tankers carrying liquid oxygen through the Shalamcheh border, and this oxygen will be sent to hospitals where coronavirus patients are hospitalized,” said Asaad al-Idani, chairman of the committee and governor of Basra, in a statement.

On September 5, the state-run news agency IRNA reported on the dangerous condition at Iran’s hospitals due to a scarcity of oxygen:

“Hospital oxygen maker devices do not meet the needs of patients in southwestern Khuzestan hospitals due to high humidity of the air, and we are facing a severe shortage of oxygen capsules due to the sultry air. The oxygen maker machines of Taleghani Hospital in Abadan and Valiasr Hospital in Khorramshahr are disabled, and more than 200 capsules of oxygen are in short supply. In Khuzestan, 20 cities, including Abadan, Khorramshahr, and Shadegan, are now in the red zone, three are orange, and four are yellow.”

The scarcity of oxygen and related devices is so severe in Iran that a number of people have organized oxygen therapy campaigns to raise money and provide oxygen devices.