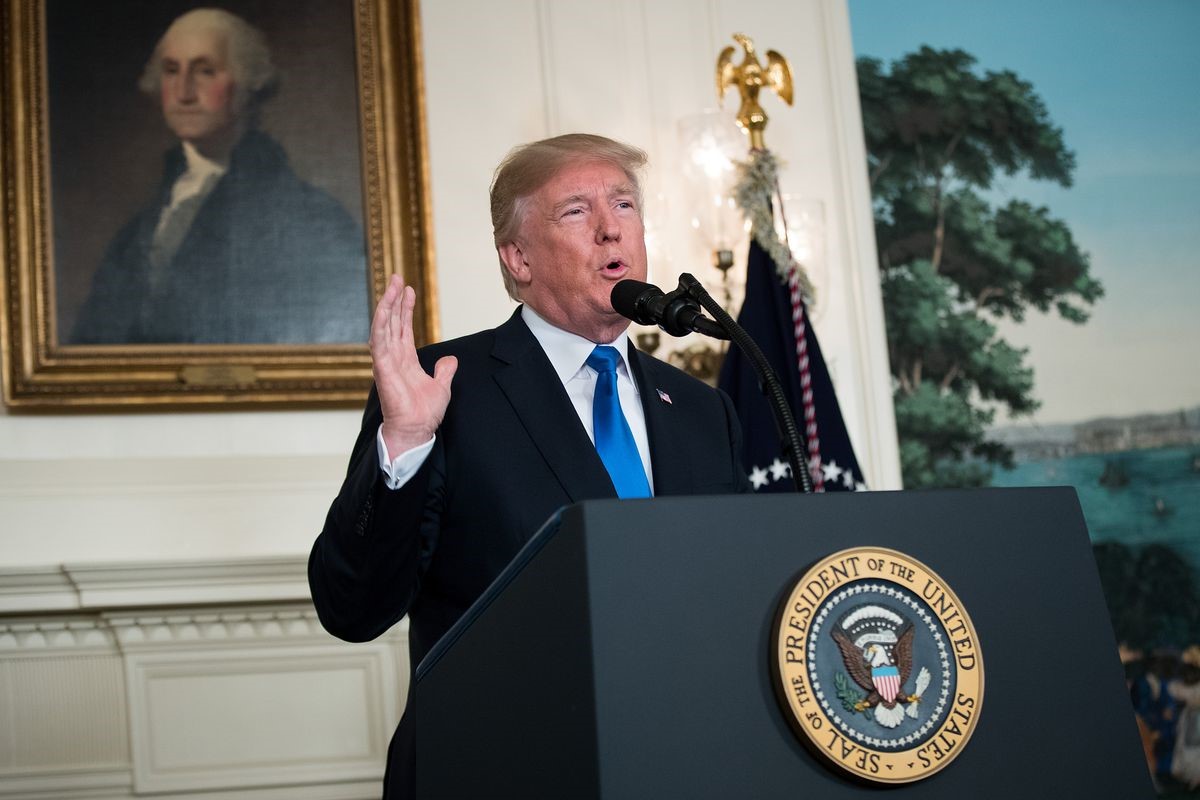 Analysts say the measures could cause Iran to retaliate.
By Zeeshan Aleem  @ZeeshanAleem  [email protected]

The Trump administration on Friday announced new sanctions against Iran’s Islamic Revolutionary Guard Corps, the powerful security and military organization that is key to Iran’s regional influence, as part of Trump’s broader agenda to get tough on Iran for its support for terrorism in the Middle East.

The Treasury Department authorized the sanctions against the IRGC using a 9/11-era executive order that George W. Bush’s administration used to block financing to terrorist organizations.
The new designation freezes the IRGC out of the US financial system. The Treasury Department also announced new sanctions against three Iranian companies and a Chinese company for supporting the Iranian military or the IRGC.

Experts say the move could put a dent in Iran’s fragile economy and cause the IRGC to retaliate against US military forces in the Middle East.
During his speech announcing his new Iran policy, in which he announced he was decertifying the Iran nuclear deal, Trump referred to the IRGC as “the Iranian supreme leader’s corrupt personal terror force” and encouraged the US’s allies to join in applying more pressure against it.

“I am authorizing the Treasury Department to further sanction the entire Islamic Revolutionary Guard Corps for its support for terrorism, and to apply sanctions to its officials, agents and affiliates,” Trump said. “I urge our allies to join us in taking strong actions to curb Iran’s continued dangerous and destabilizing behavior.”

Trump’s targeting of the IRGC under the Bush-era order, known as Executive Order 13224, fell short of a more severe kind of designation. In the runup to the speech, many Iran watchers believed there was a good chance that Trump would direct the State Department to officially label the IRGC a foreign terrorist organization.

It would have been unprecedented for the administration to label a state organization as a terror group and would’ve exposed the organization to a wider set of punishing sanctions. But that didn’t happen.

Trump’s move against the IRGC is softer that it could have been. But it’s still aggressive.
As BuzzFeed News notes, Secretary of State Rex Tillerson suggested on Thursday that the administration believed officially designating the IRGC as a terrorist organization would have been too aggressive.

“There are particular risks and complexities to designating an entire army, so to speak, of a country where that then puts in place certain requirements where we run into one another in the battlefield that then triggers certain actions that we think are not appropriate and not necessarily in the best interest of our military,” Tillerson said at a press conference.

But the new authorization under Executive Order 13224 is still one of real consequence, and some analysts believe that Iran will not consider it to be that different from the official foreign terrorist organization designation.

“I think of it as a distinction without a difference in terms of what the impact will be and how the Iranians are going to read it,” Suzanne Maloney, deputy director of the foreign policy program at the Brookings Institution and a former State Department adviser on Iran, told me.

The main reason Iran is likely to be upset over the Trump administration’s campaign against the IRGC, which is already the target of other US sanctions over its conduct, is that it will make foreign countries more reluctant to invest in the US.

“The intent of anything to do with the IRGC is basically to cast a very broad shadow over sectors of the Iranian economy and exacerbate the compliance nightmare for foreign businesses that may be considering trade and investment with Iran,” Maloney told me.

The IRGC has control or influence over wide swaths of the Iranian economy, from the energy sector to auto manufacturing. Any new sanctions that the Trump administration places on the IRGC under the new authority will make foreign investors more worried that they could inadvertently do business with an IRGC-owned or -affiliated company and then expose themselves to punishment from the US.

After the Iran nuclear deal was struck in 2015, the international community agreed to lift crippling sanctions on Iran’s economy in exchange for Iran sharply reducing its nuclear program. Iran is now slowly reintegrating itself into the global economy, and wary of any new measures from the US that make investors more nervous about doing business with it.
Maloney thinks that Trump’s targeting of the IRGC is likely to cause blowback. “I think there is going to be some kind of retaliation from Iran,” she said.
Iran has many ways to do that, as it supports or sponsors forces opposed to the US and US interests in Syria, Iraq, Yemen and elsewhere. Trump wants to make life harder for Iran — and Iran is likely to respond in kind.