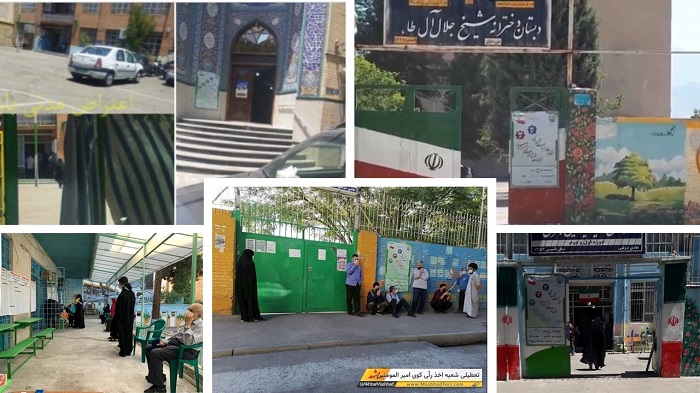 The National Council of Resistance of Iran (NCRI), and the People’s Mujahedin of Iran (PMOI / MEK Iran), reported that as was expected, Iran’s sham presidential election, held on Friday, turned out to be a farce and a humiliation for the tyrannical regime of the mullahs. According to information obtained by Iranian resistance, less than 10 percent of eligible voters cast their ballots, which displays the Iranian people’s utter contempt for the regime in its entirety.

The process closely monitored by the National Council of Resistance of Iran (NCRI), and the People’s Mujahedin of Iran (PMOI / MEK Iran), and more than 1,200 journalists and reporters of the Iranian Resistance Satellite TV channel, from 400 cities across Iran and more than 3,500 sent video clips and reports that showed empty polling stations.

The evidence was so undeniable that even international media outlets that tend to cast a positive light on the Iranian regime’s elections acknowledged the apathy among voters.

The regime leaders pleaded for a vote

The nationwide boycott of the sham elections happened while regime leaders pleaded for the public to go out and vote on several occasions.

Supreme leader Ali Khamenei described the election as a “national exam.” Other senior officials from all factions of the mullahs’ regime begged the people to vote, described it as a necessity for national security.

All Friday prayer leaders explicitly said that those who don’t vote are “voting for the MEK.”

The Nationwide boycott of the sham election

Mullah’s regime resorted to other tactics such as buying votes, handing out free food and accessories, and other incentives to encourage the people to come to the polling stations. But the people didn’t buy into such ruses.

The Nationwide boycott of the sham election was a decisive vote for regime change and proof that the Iranian people reject all factions within the regime.

It has been reported that many people openly said during the runup to the elections, “My vote is regime change.”

Mrs. Maryam Rajavi, the President-elect of the National Council of Resistance of Iran (NCRI), described the nationwide boycott of the sham election as “the greatest political and social blow to the mullahs’ Supreme Leader Ali Khamenei and the ruling theocracy and worthy of a historic congratulation to the people of Iran.”

She added that the boycott proved and showed the world that “the Iranian people’s only vote is to overthrow this medieval regime.”