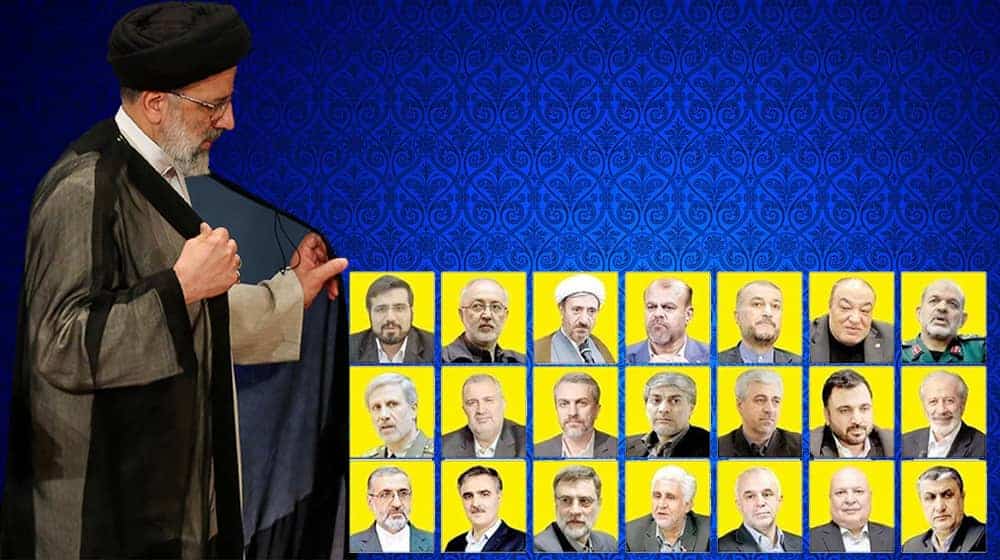 The National Council of Resistance of Iran (NCRI), and the People’s Mujahedin of Iran (PMOI / MEK Iran), reported that all but one of Ebrahim Raisi’s recommended ministers were approved by the Iranian regime’s parliament.

Khamenei, handpicked Raisi and his ministers

Raisi’s master, the regime’s Supreme Leader Ali Khamenei, who has handpicked both the parliament and Raisi’s ministers, was anticipated to use the parliament as a rubber stamp for him.

Several of the appointees are members of the regime’s terrorist Islamic Revolutionary Guard Corps (IRGC), which is responsible for much of the regime’s crackdown on domestic dissent as well as its backing for terrorist proxies around the world.

The regime’s terrorism and diplomacy

While the regime’s defenders attempted to portray the previous administration as moderates, the discourse eventually served to obscure the regime’s nefarious deeds.

Hassan Rouhani, the regime’s former president, affirmed that the regime’s terrorism and diplomacy work hand in hand. He praised the cooperation between the regime’s diplomatic and military personnel in a meeting in April.

He boasted of his own contribution to both sides of this duality, saying, “The frontline and diplomacy are two arms of the same strategy.”

Following a foiled Iranian terror plot on an Iranian Resistance event in France in 2018, Rouhani’s membership in the SNSC was highlighted. The event, organised by the National Council of Resistance of Iran (NCRI), was recognised by the regime’s intelligence as a high-value target. Assadollah Assadi, an Iranian diplomat-turned-terrorist, was entrusted with recruiting expatriate operatives to infiltrate the country with explosives.

Two of Assadi’s accomplices were apprehended before transporting the explosives from Belgium to France, and he was apprehended himself a day after the operation was supposed to take place. Early this year, they and a fourth co-conspirator were eventually found guilty and sentenced to prison in Belgium, bringing increased attention to the regime’s reliance on terrorism as a form of statecraft.

Rouhani’s successor is likely to continue this trend, especially after appointing known human rights violators and terrorist operatives as his closest advisers.

Ebrahim Raisi, who was one of four members of the Tehran “death commission” that oversaw the massacre of 30,000 political prisoners in the summer of 1988, has a particularly terrible history of such crimes.

Raisi’s position put him in direct touch with the primary conduits for Tehran’s logistical backing of those groups, which could have affected his cabinet picks.

The Foreign Minister, of course, is the most important of these positions in terms of Iran’s foreign policy and attitude to Western interests.

Hossein Amir Abdollahian, whose ostensible diplomatic credentials were obtained by his employment as a deputy minister under Zarif, but whose dedication to terrorism was made evident by decades of service to the IRGC’s international special operations wing, the Quds Force, is now in charge of that office.

Aggressive behaviour at home and abroad

In the years ahead, Tehran is likely to display the same aggressive behaviour at home and abroad as it did in the closing years of Rouhani’s presidency. In the absence of diplomatic protection from the likes of Javad Zarif, it is also likely to do so.

The international community will find it much more difficult to engage in normal dialogue with a government led by individuals who are wanted by Interpol, or who are committed to “following in the footsteps” of Iran’s most notorious terrorist, or who are credibly implicated in the massacre of 30,000 Iranian dissidents. In the face of such leadership, Western approaches toward Iran must accept the government as it is, not as naive legislators would wish it to be.