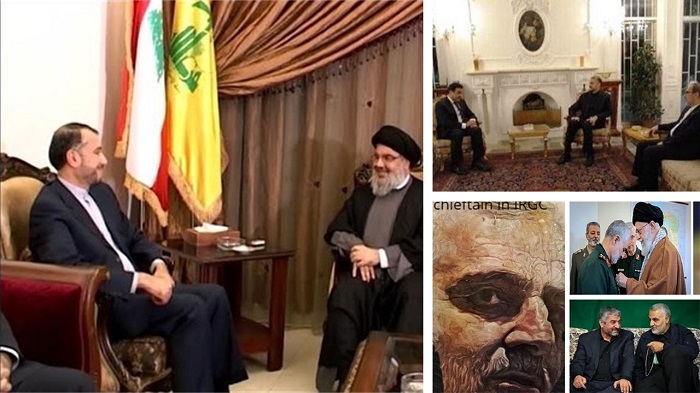 The National Council of Resistance of Iran (NCRI), and the People’s Mujahedin of Iran (PMOI / MEK Iran), Hossein Amir-Abdollahian, the Iranian regime’s Foreign Minister, stated during a visit to Lebanon last week that the regime’s terrorist actions would only expand under Ebrahim Raisi’s presidency.

Amir-Abdollahian met with Hassan Nasrallah, the head of Hezbollah, the regime’s Lebanese terrorist proxy force, during his trip. According to Lebanese media, the visit demonstrates how the regime has made the proliferation of terrorism a top priority.

Amir-Abdollahian has publicly portrayed himself as a “field agent” with close ties to Qassem Soleimani, the regime’s senior terrorist. Amir-Abdollahian said he will “continue the path of Soleimani” during a meeting between members of the Majlis and nominees for the foreign, interior, and health ministries.

Soleimani was the head of the Quds Force, the terrorist wing of the Islamic Revolutionary Guard Corps (IRGC), which used the regime’s proxy groups to promote terrorism outside of Iran.

While the government continues to fund Hezbollah and its activities, Amir-Abdollahian admitted that the regime will continue to export fuel goods to Lebanon, which is experiencing fuel shortages as a result of its economic and political issues.

The regime is willing to grant additional aid to Lebanon

Despite the regime’s oil sales being sanctioned by the US, Hezbollah has been in charge of coordinating gasoline shipments from Tehran. Worse, Amir-Abdollahian has declared that the regime is willing to grant additional aid to Lebanon, including the construction of power plants.

These statements come at a time when Iranians are barely scraping by. The Covid-19 outbreak and the regime’s incompetence have resulted in the deaths of over 457,800 people. Thousands of Iranians in intensive care units died this summer as a result of the recurrent power disruptions.

The state-run Barkat News reported last month in response to the regime’s intentions to develop power plants in Lebanon that the money for the project is “coming out of the Iranian people’s pocket,” despite the fact that they are already suffering from Iran’s current issues.

Iranian society is already tense as a result of the crises

Iranian society is already tense as a result of the crises, but the regime is determined about funding foreign terrorist groups in order to ‘export domestic crises abroad.’ Lebanon, Iraq, and Syria are defined as the regime’s “strategic depth” by top regime leaders.

The regime’s continued supply of petroleum to Lebanon via Hezbollah fits easily with the regime’s terrorism export strategy.

As Lebanon’s crises worsen, Lebanese citizens have taken to the streets in dozens of protests, blaming Hezbollah for the country’s problems. A precipitous collapse in the local currency, as well as major gasoline and pharmaceutical shortages, are among the present challenges.

With the regime’s participation in Lebanon, the US faces the risk of extending the regime’s sanctions to the country, which the Al-Akhbarieh newspaper believes Lebanon cannot bear.

The regime’s need for Hezbollah’s help stems from the proxy group’s role in the Syrian war and other Middle Eastern wars on behalf of Iran.

Hassan Rouhani, the regime’s former president, admitted on April 8 that the regime’s ‘frontline and diplomacy are two weapons.’ The international community should expect Tehran to increase its hostile actions as long as the mullahs’ regime remains in power.