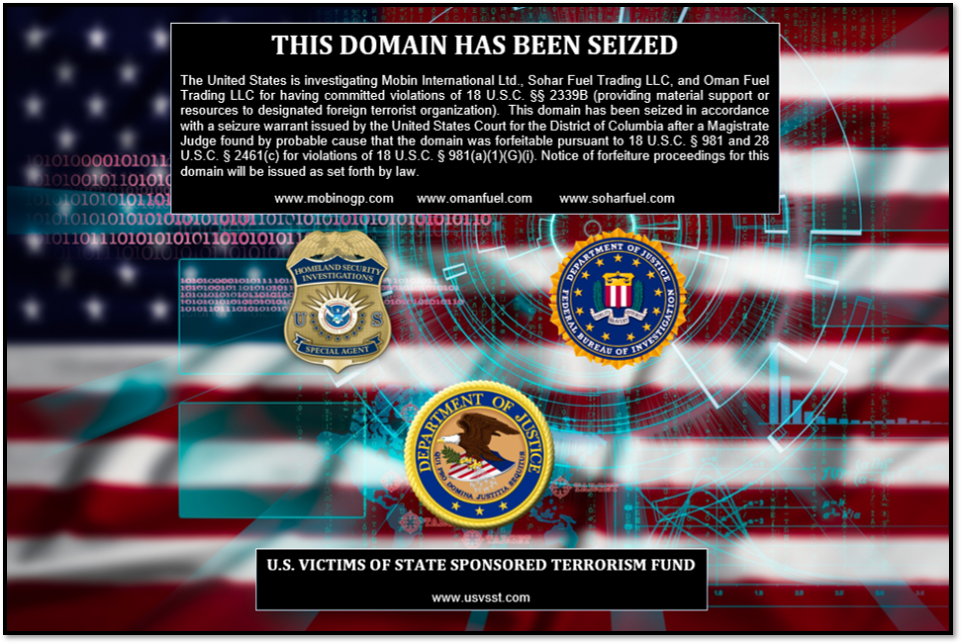 According to Iranian opposition The National Council of Resistance of Iran (NCRI), and the People’s Mujahedin of Iran (PMOI / MEK Iran), the Justice Department announced on Tuesday evening that the US government has seized dozens of US website domains linked to Iran and tied to what it claims are disinformation sources.

“In violation of US sanctions, the United States seized 33 websites used by the Iranian Islamic Radio and Television Union (IRTVU) and three websites operated by Kata’ib Hizballah (KH),” the agency said in a statement, adding that “components of the Iranian government, disguised as news organizations or media outlets, targeted the United States to subvert US democracy.”

As a result, some users are unable to access websites such as Presstv.com, an Iranian government-run English-language news outlet.

Users are receiving the following message when attempting to access: “The domain presstv.com has been seized by the United States Government in accordance with a seizure warrant pursuant to 18 U.S.C…. as part of a law enforcement action by the Bureau of Industry and Security, Office of Export Enforcement, and Federal Bureau of Investigation.”

On Tuesday, the US administration blocked the websites of several news organizations and television channels, including Press TV, Al-Masirah, Al-Alam, and Al-Maalomah, in a flagrant violation of press freedom, Fars tweeted.

The removal of the outlets, as a US national security official told CNN earlier Tuesday, comes just days after Iranian hardliner Ebrahim Raisi was elected as the country’s future president in a process that the US State Department described as “pre-manufactured” and “unfair.”

Raisi’s significant competitors were prohibited from the contest, and overall voter turnout was 48.8%, the lowest since the Islamic Republic’s founding in 1979.

The Iranian President-elect, speaking at a news conference on Monday, ruled out a meeting with US Vice President Joe Biden and urged the US to lift sanctions against Tehran and re-join the Joint Comprehensive Plan of Action or JCPOA.

State Department spokesman Ned Price told reporters on Monday that the US expected the seventh round of talks and that Raisi’s victory would have no bearing on the nuclear negotiations in Vienna.

“When it comes to our diplomacy, we’ve always said that achieving mutual compliance with the JCPOA is absolutely in our interests because it would allow us to once again permanently and verifiably prevent Iran from obtaining a nuclear weapon,” Price claimed. “Before the Iranian election, that was in our best interests. After the election, it is clearly in our best interests.”

“I would claim that, while Iran will have a new president in the coming weeks, Iran’s supreme leader ultimately determines Iran’s policy on a variety of important issues,” Price concluded.