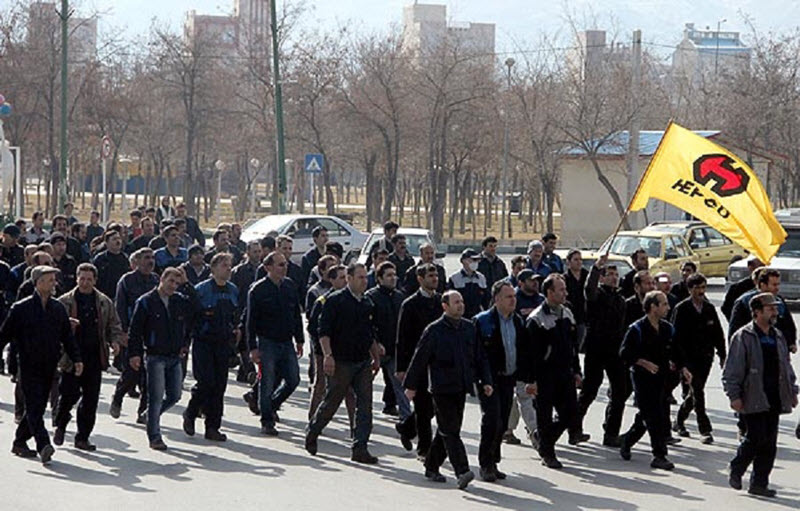 The HEPCO Company is the largest manufacturer of road construction machinery in the Middle East, and has been in business for the past 43 years. As the regime transfers large private industries and factories to its own authorities, the company’s production, which has a capacity of 3000 units, has dropped to 100 units. HEPCO’s predicament has been transferred to its employees, who have been protesting deteriorating working conditions and unpaid wages for several months.

Fifteen workers of the HEPCO construction company have now received a five-year suspended sentence, but must serve 1-2 years in prison and receive 74 lashes on charges “disrupting public order”. The sentence was handed down by Iran’s judiciary in Arak. This move was likely meant to intimidate the hundreds of protesting workers at HEPCO.

This shocking sentence and the punishment of Iran’s workers was immediately condemned by the Labor Commission of the National Council of Resistance of Iran (NCRI), who stipulated, “The judiciary of the mullahs is telling the workers, whose only sin is to demand payment for their toil, that if in the next five years, they dare do anything wrong, they will be subjected to such punishments, and they should give in to their working conditions, which means not getting paid for their labor.”

All Iranian workers are called upon by the Labor Commission of the NCRI to continue their protests against the tyranny of the regime. The NCRI also called for the support of international labor associations, workers’ unions, and human rights organizations for the workers of Iran, and their efforts to pressure the regime regarding this inhuman sentence.

Most of Iran’s workers now live below the poverty line, and things are deteriorating daily. State-run Tasnim News Agency published a report in June about the living conditions of workers in Iran. It quotes the Iranian Supreme Labor Council’s representative for Iranian workers, Faramarz Tofiqi, who said, “By stating that 83 percent of workers are living under the line of ‘death,’ we foresee that by August, we’ll face an inflation of production over consumption.”

As well, according to the report, “In the past three months, the prices of food and other necessary items has increased so much that we seldom see anyone who isn’t unsatisfied with the situation. Meanwhile, workers are the class of the society that is feeling the hardships more than others, which is a concerning situation. The increase of housing and rent prices, the increasing value of the dollar, coins, gold, poultry, bananas, meat, rice, cooking oil and… all of these indicate that the table of families, especially workers, will diminish in the coming year. The continued upward trend of prices in the market predicts that in the second half of the current year, the people will be even harder pressed to supply their families.”

Tofiqi also said in his interview with Tasnim, “One of the topics that labor representatives often discuss is that every year, the base salary of workers is specified according to the inflation rates of the previous year. This means that we make decisions for the coming year base on the inflation rates of the previous year.” He added, “The government must solve economic problems through correct planning. For instance, should the people control this huge amount of financial circulation? No, it’s the government that should plan and controls the liquidity.”

As the purchasing power of the people diminishes, producers will find no customers for their goods, according to Tofiqi. The Iranian people will continue toward poverty, and be unable to afford the most basic needs on their meager salaries. “The sudden spike in prices… shows that government officials have abandoned the people,” Tofiqi said, and warned, “This sudden uncontrolled spike in prices is leading toward circumstances where workers living under the line of ‘death’ will no longer be able to tolerate the situation. Government officials have abandoned the country.”