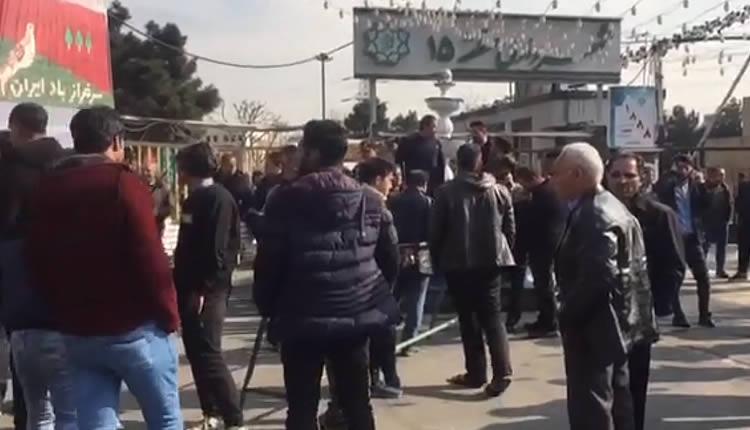 The People’s Mojahedin Organization of Iran (PMOI/MEK) inside Iran report that while the Iranian regime claims that the turn of the year protests have ended, in truth, several protests are ongoing, especially by Iranian workers who continue to protest many issues, including non-payment of salaries. These protests cut across lines from agricultural workers, to mine employees, to retirees.

Agricultural workers started their sixth day of protest at a local factory in the Khuzestan province on February 5th. They sought to highlight the injustices they have endured from the management, such as retired workers not receiving their pension payments for more than a year. Workers from a variety of sectors — agriculture, manufacturing, engineering, and commerce went collectively went to the company’s yard, closed the gate, and prevented the the trucks from leaving the factory.

Retired personnel of the Steel and Mine Industries of Isfahan and Ahwaz have also held a protest, gathering in front of the retirement board and in front of the governorate. Again, this appears to be due to non-payment of pensions.

Iran’s disastrous economy, said to be caused by corruption throughout the banking industry and the regime, keeps the Iranian people limited in terms of jobs and economic security.

The Iranian people believed that the 2015 nuclear agreement, which lifted various sanctions, would benefit them. Instead, it benefits the Islamic Revolutionary Guard Corps (IRGC) and the regime, while the average Iranian loses government aid. Unemployment is high, impacting the ability for ordinary people to find work, and care for their families.

The Iranian youth have struggled to gain higher education degrees that are essentially worthless. They are justifiably angry, and although the regime tries to contain their voices, they are being heard by the outside world. The international community is taking notice.

The Iranian regime makes promises, but the people see little change. For example, the workers from Hepco were promised action regarding the non-payment of their salaries and the privatization of the company months ago. Labor Minister Ali Rabiee and the governor of Arak promised action, but nothing changed, so the protests began again on February 5th.

Despite threats of torture, imprisonment, and violence against their families, the protests allow the Iranian people to continue to be heard. Social conditions in Iran are escalating. During the protests, the Iranian people were calling for regime change. The future of Iran’s regime may be close to finality.