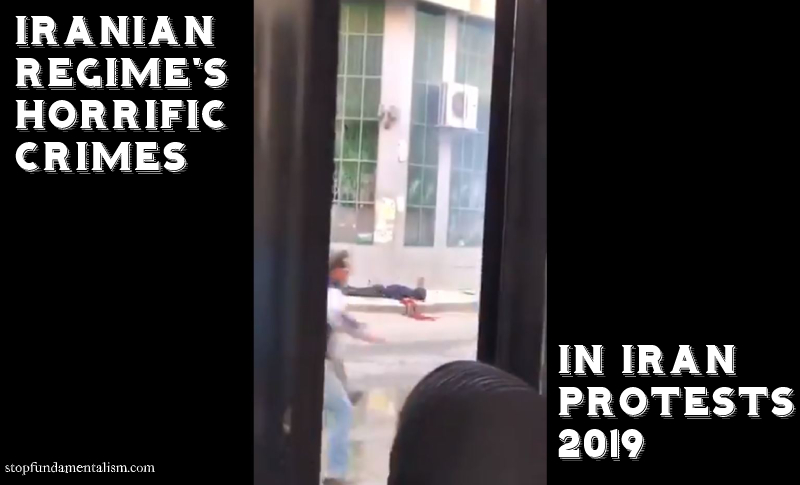 The tenth day of Iran Protests 2019 continued as Demonstrations and Clashes in Tehranpars (East Tehran), Isfahan, and Sirjan was reported through a network of the People’s Mojahedin Organization of Iran (PMOI/MEK).

On Saturday, November 23, the MEK reported that more than 300 hundred protesters have been killed and 4000 are wounded. The MEK published on Saturday, November 23, the name of 99 martyrs. Thousands are arrested and the regime has turned Grade Schools into detention centers. The number of martyrs is much higher and the regime is trying to conceal the scale of its horrific crimes.

The National Council of Resistance of Iran said in its statement on Sunday, November 24 that “the extent of the unlawful detentions is so large that the security forces have turned grade schools in many towns and cities into detention and torture centers, which is a clear violation of international conventions. Video footage of security forces transporting handcuffed and blindfolded protesters into and out of the Quds elementary girls school in Tehran has circulated on the Internet.”

This shows the brutality & desperate nature of a regime facing the wrath of a restive nation.#IranProtestspic.twitter.com/p3pckxg8Zc

The pictures of some martyrs of Iran Protests 2019 were published by the MEK network on social media.

“Faces of the brave, who made the ultimate sacrifice for Iran’s freedom. With such valiant children, our nation will undoubtedly defeat the tyrants & will achieve victory,” tweeted Ali Safavi from the Foreign Affairs Committee of the NCRI.

The Iranian regime desperately shows concern about MEK’s role in recent uprisings and is trying at any cost to crackdown the protests and silence it.

Mrs. Maryam Rajavi, the President-elect of the NCRI, described the situation as a slaughter of the protesters and a crime against humanity.

Mrs. Rajavi urged the United Nations Security Council, governments and the international community to bring about an immediate halt to the killings and suppression and to secure the release of those detained and emphasized that since the detainees are at risk of being tortured or executed, the UN must immediately send investigative and fact-finding missions to Iran.

She added that the leaders of this regime must face justice for committing crimes against humanity. Silence and inaction vis-à-vis crimes against humanity, she said, are not only a violation of international conventions, laws, and standards but also embolden the mullahs to continue to commit these atrocities against the Iranian people and spread them to the rest of the region.

“The U.S. President, through the Oval Office, can have a huge impact on both pressuring regimes that oppress people & providing inspiration for those within society who are fighting for justice & their basic rights.”@realDonaldTrump#Iran#IranProtestspic.twitter.com/iGDCp6oOc0

The names of 99 martyrs are as follows: