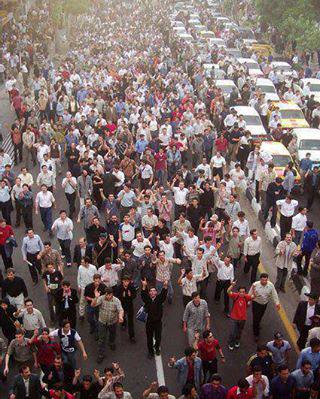 Stop Fundamentalism – Various reports of disturbances are coming out of Iran just a day before the so-called presidential elections in the country, Iranian dissident sources say.

“Down with dictator,” chanted demonstrators as security forces stormed the crowed with batons and tear gas. They prevented anyone from filming or taking pictures.  Demonstration lasted well into the night.

At the same time eye witnesses in the Iranian central city of Isfahan reported about demonstrations in Tohid and Charbagh streets.  Clashes between demonstrators and security forces lasted until 10pm local time.   Protestors reportedly blocked Tohid street during the demonstration.

Protests have also been reported in south-eastern city of Ahwaz and central city of Shiraz yesterday, reports Hambastegimeli.