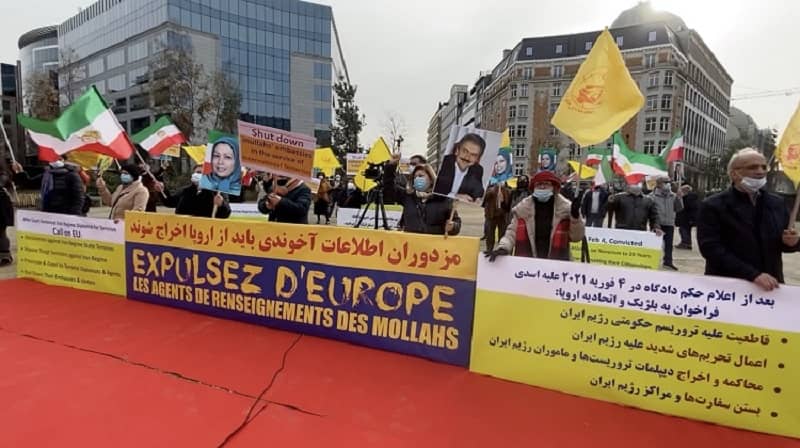 Josep Borell, the EU’s High Representative for Foreign Affairs and Security, must be wearing blinkers. It is only a few weeks since one of Iran’s own officials was sentenced for attempting to blow up a rally organized by The National Council of Resistance of Iran (NCRI), and the People’s Mujahedin of Iran (PMOI / MEK Iran) in the heart of Europe.

Belgian law enforcement officials were sanguine about the direct connection between Assadollah Assadi, the Vienna-based Iranian diplomat and his three cohorts, and the regime in Tehran.

One of those who would have been involved in the decision to plan the bomb attack, the Iranian Foreign Minister, Mohammad Javad Zarif, has been courted by Josep Borell and has even been invited to speak alongside him at the Forum in early March.

Assadi was not just implicated in the Villepinte (Paris suburb) rally bomb threat. When he was arrested in Germany, police found a diary with details about Assadi’s wanderings all over Europe in pursuit of terror strategies.

Terrorism is part of the mullahs’ strategy

Assadi did not do this alone, like a mad gunman. This was part of the mullahs’ strategy to pursue their enemies wherever they thought they lurked.

The fact that assassinations and bomb attacks could cause collateral damage to innocent European people. It seems to have never entered either the mullahs’ heads or it seems those who put Europe’s economic interests ahead of the security of the European people.

Perhaps Borell thinks that when Iranian diplomats pop over to Europe with explosives and detonators in their diplomatic baggage that this is OK as it is normal behavior for foreign diplomats.

Does Borell worry about whether appeasing the Iranian regime could result in the deaths of men, women, and children who know nothing about Iran?

The cozying up to the Iranian regime can only end in tears. Perhaps Josep Borell really doesn’t worry that appeasing Iran’s medieval monks could end up with the thugs of the likes of the IRGC having nuclear missiles at their disposal?

Whatever Josep Borell really thinks is in any way immaterial to the conduct of the Iranian regime. Safe thinking that they have no real threat to their continuation of human rights abuses from the international community, they can keep arresting, torturing, and executing however in the Iranian community they want.

The uprising in Sistan and Baluchestan

This last week, another Iranian community has been under attack from the IRGC thugs. Impoverished porters in the border region of Sistan & Baluchistan province.

They have been shot by the IRGC in an attempt to extort more money from the paltry proceeds they get from carrying fuel over the border into Pakistan.

Dozens of porters were killed and many seriously injured. The shooting sparked a major uprising in Sistan & Baluchistan border towns which did not hit world headlines because the regime blocked internet access to the region. Is this the regime that Mr. Borell and his team really want to do business with?