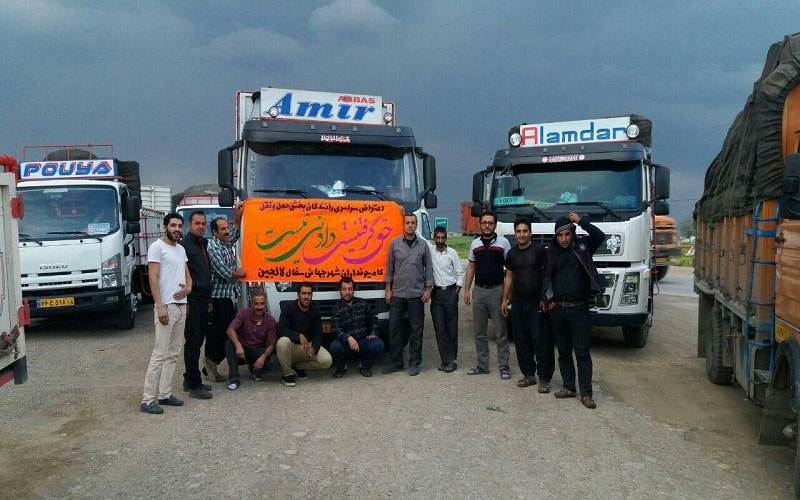 by Navid  Felker
In Iran the truckers’ strike has entered its 11th day. Footage and images circulated on social media on June 1st, displayed cab drivers, who have also joined the strike in several cities across Iran. It also showed striking truckers and taxi drivers resisting security forces. In Isfahan, strikebreakers were reportedly sent from other towns to help authorities end the protests.

One of the largest labor unions in the United States and the world, The Teamsters Union, has also expressed solidarity with Iranian truckers. Teamster General President James Hoffa announced that the International Brotherhood of Teamsters, which represents 1.4 million transportation and supply chain workers in both the United States and Canada, “stands in solidarity with our Iranian brothers and sisters.”

Hoffa said in a letter to Abolfazl Mehrabadi, deputy director of the Iranian interest section at the Pakistani Embassy in Washington, D.C., “Iranian truck drivers in 25 provinces and 160 cities have been on strike over low pay, rising operating costs, increased tolls and other regulatory fees. #Teamsters stand in #solidarity with our Iranian brother & sisters!”

He added, “We urge the government of Iran to listen to the grievances of the striking Iranian truck drivers, address their just demands and recognize their internationally recognized rights to assembly, speech, freedom of association and collective bargaining.”

Joining the truckers protesting low wages, high costs of spare parts, and a significant increase in social welfare premiums, are the cab drivers in several cities across Iran.

The Iranian government has accepted an increase of up to 20 percent, but the truckers are demanding a 35 to 50 percent increase for haulage charges. They are also angry because they are being forced to install tracker devices on their vehicles and pay for related expenses, while “only security forces, intelligence agents, and the National Oil Company benefit from them.”

On May 31st, Abdol-Hashem Hassan Nia, Iran’s Roads and Urban Development Ministry Deputy said, “Haulage fees have already been increased up to 20 percent and the problem of truckers’ subsidies addressed, but meeting their other demands takes time.” Truckers rejected the officials’ promises, and claim they will continue the strike until all of their demands are met.

A former member of the board of directors of the Union of Workers of Tehran and the Suburban Bus Company (UWTSBC) and labor rights activist Mansour Osanloo said in an interview that truckers’ and cab drivers’ demands are reasonable and legitimate. Osanloo said, “Truckers’ demands, including higher wages, have been accumulated over the past few years, reaching an unbearable point, while their governmental subsidies have also been cut. Furthermore, roads in Iran are not safe, and many road patrols demand high bribes to let trucks pass. In the meantime, most of the haulage and transport companies that are owned and managed directly by members of the Islamic Revolutionary Guards Corps (IRGC) or people supported by it charge truck owners with high commissions.” He added that the truckers’ strike has struck a chord around the world.

The truckers in Iran either own their vehicles fully, or work for truck owners, but most pay for their trucks to government-controlled companies in installments for years. The government the biggest importer and distributor of strategic commodities.

There are currently near 370,000 trucks running in Iran, of which 120,000 are more than 35 years old, according to the Roads and Urban Development Ministry.