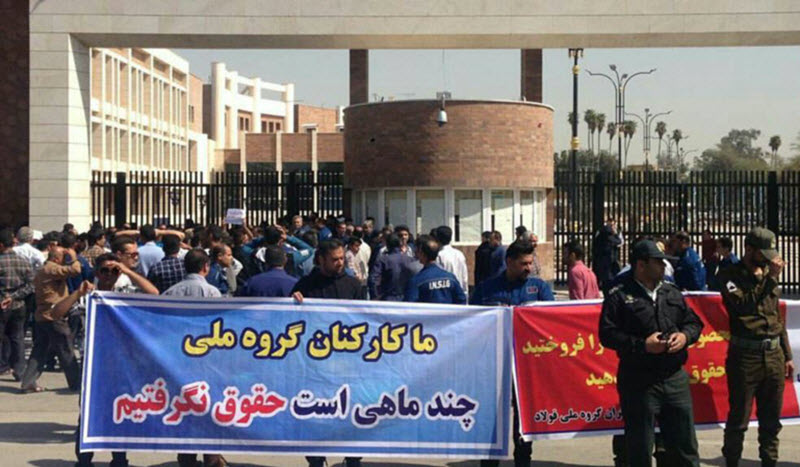 Earlier this week, outside the Khuzestan Governor’s Office, Ahvaz steel factory workers gathered to protest their unpaid wages and concerns regarding the company’s ownership and production issues.

A large group of Ahvaz factory workers can be seen gathered outside the Governor’s Office in the southern province in video taken at the protest. They are chanting, “a nation has never seen such injustice,” and “they chant for Imam Hossein, but pride themselves in thieving,” in reference to the Iranian government taking advantage of the third Shia Imam for its own profit.

The workers are also angry over what they call “back door deals” which have destroyed factory productions and workers’ livelihood. They chanted, “What have the hidden hands done to the factory.”

This new round of protests by workers of the Iran National Steel Industrial Group follows officials failing to meet their demands — like receiving their unpaid wages, favorable conditions for production, and working opportunities for workers.

On social media, the workers circulated a statement saying that they are fed up with the corruption in the company.

“It’s been years that those who are against the company and work like the mafia, corrupted company managers, the shortcomings of a number of provincial and also government officials and most importantly, the failure of the top managers of the National Bank, have put the employees and their families in a predicament.”

The statement continued, “Unfortunately, this led to the death of a number of our dear colleagues and their families, and serious illnesses of a number of employees.”

The Ahvaz National Steel Industrial Group workers also wrote, “There is no need to mention the worsening state of unpaid wages anymore. Unfortunately, every two weeks, they announce that they will pay our wages in the beginning of the month but after two weeks, another manager announces that the wages would be paid at the end of the month.”

In June, the Ahvaz Steel workers protested when more than 50 workers were detained by security forces. They had demanded three months of their unpaid wages.

Four of the detainees were brutally beaten after being taken to a detention center for suspects arrested for drug offenses, according to labor unionist. The Free Workers Union of Iran stated, at the time, “One of the workers was beaten to the extent that he suffered a hemorrhage, but the authorities did not make an effort to transfer him to a medical facility.” The FWU also says that another detainee was shot with a Taser gun while in custody.

Reportedly, nearly all of the detained workers were later released on bail after other workers demonstrated for their release.

The Iran National Steel Industrial Group has a 4,000 strong workforce. It was nationalized after the Islamic Revolution in 1979, and later sold to Amir Mansour Aria, aka Mahafarid Amir Khosravi, who was executed in 2011 on charges of embezzling nearly $1 billion. After that, the company was transferred to the National Bank of Iran, who sold the complex to Abdolreza Mousavi, the owner of a major soccer club in Ahvaz and two hotels in Kish Island in the Persian Gulf. Mousavi is also the managing director of Zagros Airlines.

But, under the new owner the factory became idle, and workers’ salaries stopped being paid, leading to protests. Would Mousavi keep the factory running, workers worried, as they allegedly watched equipment removed from the complex.

In May, ownership was once again transferred to the National Bank, but according to state-run ILNA News Agency, the 4,000 Ahvaz workers of the National Steel Group have been complaining about ambiguities regarding the factory’s ownership.