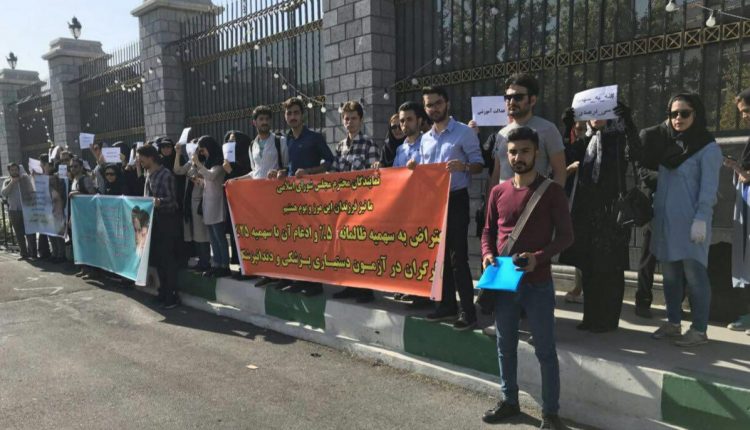 by Navid  Felker
On Monday June 11th, fifty workers of Ahwaz Steel National Industrial Group were arrested by the authorities for participating in protests. Another group of workers who had gathered on Tuesday to protest the arrest of their colleagues were also reported to have been arrested.

Human Rights Activists News Agency (HRANA) had stationed reporters at the protest location on Monday. They claimed that protesters were immediately attacked by security and riot police, and the fifty workers were detained on the spot.

Following Monday’s events, reporters say that workers gathered in front of the governor’s office on Tuesday to protest the arrest of their colleagues. Ten workers are believed to have been arrested on Tuesday. In an interview with ILNA, Gholamreza Shariati, Governor of Khuzestan, confirmed the arrest of the workers and said that his office is following up on the detentions.

The detainees were taken to Ahwaz Drug Crime Centre. Their families have gathered at that location, and have stayed there since Tuesday morning. They wish to ascertain their loved ones’ situations.

Monday was the 13th day of the protests. Workers began their protests in front of the Governor’s office, and after getting no results, blocked the Ahwaz-Tehran train route for an hour and a half, in an attempt to make their voices heard. Afterward, they returned to the Governor’s office and began chanting slogans urging the authorities to heed their demands.

For more than three months the workers have not received their pay or their benefit premiums, which have been unpaid for much longer. Workers worry that recent changes in management will lead to shutdown of the plant.

As part of the confiscated assets of Amir Mansour Investment Group, Ahwaz Steel National Industrial Group was handed over to the judiciary after its director was convicted of financial fraud amounting to 3 billion toumans (71 million USD).

The only functioning section of the plant now, is pipe production. The other sections are closed due to a shortage of raw materials. The workers claim that the government is in a position to provide the raw materials that could re-open the other sections of the plant.
An announcement was made by the Khuzestan Governor, who said that the government is trying to come to terms with the banks and the Privatization Organization over the assignment of 50 billion toumans for the revitalization of the plant.

Iran’s failing economy in recent years has led to many of its factories and manufacturing units to be shut down. This resulted in widespread unemployment, and the subsequent labour protests.