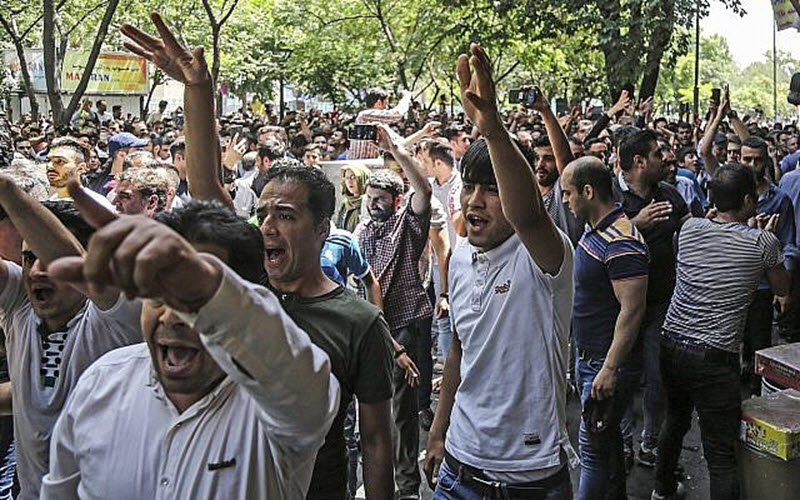 The situation in Iran is getting worse every day. The economic situation is deteriorating and the domestic unrest is still very much present. The currency – the Rial – is collapsing, and goods are becoming more and more expensive.

The people are making their discontent heard. It is not something that the people are discreet about any more for fear of arrest, imprisonment, torture or even execution. They still risk these things but they know that something has to give. They are bravely paving the way for a new Iran – one that is free, democratic and respectful of human rights. And most importantly, free from clerical rule.

There are protests being carried out across the country – truck drivers, teacher and bazaar shopkeepers are among some of them. The situation is so tense and delicate in Iran that another explosive protest could break out at any time.

The people have great support from the main opposition group that has been organising the protests. The Iranian Resistance has a huge following in Iran and it is helping the people coordinate the movement that is being taken.

The current President of Iran – Hassan Rouhani – has been described as a moderate. But in reality and in practice, there is nothing moderate about him at all. He has presided over a huge number of executions and he has allowed Iran to continue participating in terrorist activities across the Middle East.

Moderation is something that cannot exist with this clerical regime because it goes against the regime’s principles. It simply cannot exist with moderation and it is for this reason that the people are pinning their hopes on regime change.

The United States has been pursuing a maximum pressure campaign so that the Iranian regime’s belligerence ends. When U.S. President Donald Trump announced earlier this year that the United States would be exiting the 2015 Iran nuclear deal, he gave a long list of reasons as to why.

His Secretary of State Mike Pompeo has also been outspoken about Iran’s malign activities. He said that Iran has been “confronting the world as the world’s largest state sponsor of terror for quite some time.” He added: “They have armed militias, the Lebanese Hezbollah, Makateeb Hezbollah, militias in Iraq; they’re arming the Houthis in Yemen, launching missiles in the Gulf states.”

The U.S. administration has included human rights in its list of demands for Iran and it has made it very clear that pressure will increase if Iran does not adhere to these standards – standards that not just the U.S. wants to see it meet, but also ones that the Iranian people want to see.

If the international community continues to put pressure on Iran and if the people continue to make their discontent known, it will not be long before the clerical regime topples. Pressure must be maintained and should be supported by all countries that respect human rights and want to see an end to the numerous conflicts in the region.