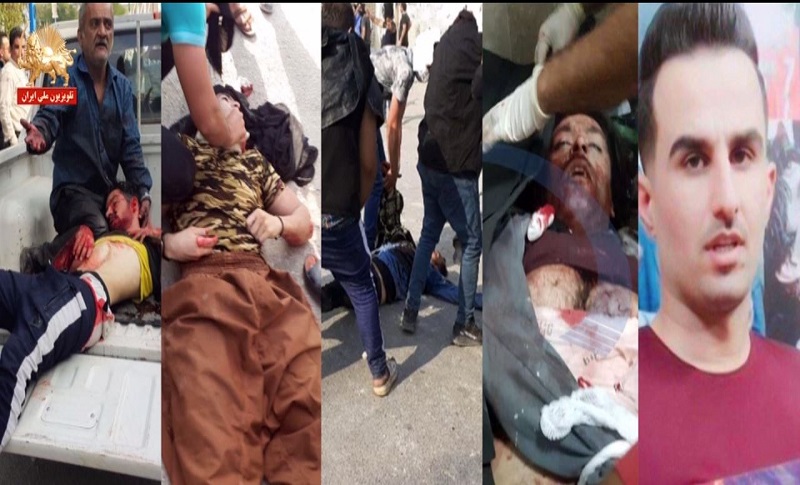 Anti-regime protests began in Iran on Friday November 15, 2019 after the regime tripled the price of gasoline. More than 107 cities witnessed its people risen up against the mullahs dictatorship ruling Iran since 40 years. The people chanting “Death to the dictator,” “Death to Khamenei” “Death to Rouhani” “Don’t be afraid, we’re all together,” and “Mullahs must get lost!” The regime has cut off Internet but the Resistance Units of the People’s Mojahedin Organization of Iran (PMOI/MEK) coordinating much of the protests and sending out footage from the scene.

The Iranian regime’s supreme leader Ali Khamenei has ordered suppressive forces and the Revolutionairy guard the IRGC to open fire to the demonstrators in various cities. The number of the victims keeps rising but the MEK has recorded more than 200 protesters that are killed in 10 cities by the regime’s suppressive forces.

According to the MEK website many have lost their lives on November 16 and 17 in some cities such as Shiraz and Kermanshah.

Until now 19 protesters have been killed in Karaj (west of Tehran) and neighboring regions, 14 in Shahriar (south of Tehran), seven in Behbahan (southwest), five each in Khorramshahr (southwest) Marivan (northwest) and Isfahan (center), two each in Javanroud (west) and Baharestan district of Tehran, and one each in Zargan in Ahvaz (southwest) and Sirjan (south).

Few hours ago the IRGC issued a statement saying “we will take decisive action against any insecurity and acts detrimental to the well-being of the people.” Which means of course the “well-being and security of the Iranian regime.”

Just like the end of the Shah’s era the regime the world is witnessing the overthrowing process of the mullah, that have no other choice than brutal repression.

In Shiraz, south-central Iran the city is falling into the hands of protesters and the members of the regime’s Majlis (parliament) are acknowledging that the situation is now a “crisis.”

On Sunday November 17, 2019 Khamenei had the chance to set back but he “defended the tripled gasoline price” and called the protesters thugs and hooligans.”

Khamenei acknowledged the role of the MEK in protests by saying “some people are no doubt worried by this decision … but sabotage and arson are done by thugs, not our people. The counter-revolution and Iran’s enemies have always supported sabotage and breaches of security and continue to do so…Such illegal actions would not solve any problem but add insecurity on top of other problems…Lack of security is the biggest calamity for any country and society. That is what they are looking for. If you note you will see that in the last two days and nights all the centers of sedition have become active…the criminal MEK is continuously calling for these actions and encouraging these actions in social media and other places.”

Mrs. Maryam Rajavi, the President-Elect of the National Council of Resistance of Iran said in a tweet that the “regime atrocities over the past 3 days are undoubtedly a manifest case of crime against humanity. Those responsible have in the past 4 decades perpetrated crimes against humanity, including 120,000 political executions, and the massacre of 30,000 prisoners in 1988.”

Hail to the martyrs of the uprising. Such unjust shedding of blood only adds to the resolve of the Iranian people to continue their rightful resistance to overthrow the mullahs’ regime. #IranProtests #Iran

“This regime must be banished from the international community and Khamenei, Rouhani, and other regime leaders must face justice for committing crime against humanity,” Mrs. Rajavi continued.

Maryam Rajavi hailed to the martyrs of the uprising. “Such unjust shedding of blood only adds to the resolve of the Iranian people to continue their rightful resistance to overthrow the mullahs’ regime” she said.