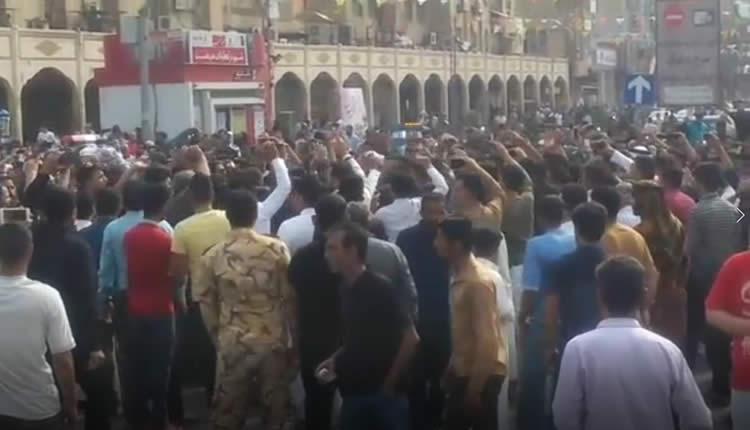 by Saeed
In southwest Iran lies the city of Ahvaz, the capital of Khuzestan province, which contains the majority of Iran’s natural resources — the area has 90 percent of Iran’s oil and gas reserves. As well, Iran’s only navigable river, Karun, runs through the city.

During the past year, there were hundreds of protests against the policy of diverting rivers. Iranian President Hasan Rouhani promised to reconsider the projects transferring water outside of Ahvaz.

Last week, thousands of people took it to the streets in Ahvaz to protest what they called the Iranian authority’s marginalization of Iranians of Arab origin, and its efforts to erase their Arab identity. Eye witnesses claimed that people chanted slogans in both Farsi and Arabic against the state’s attempts to change the demographic combination in the area. The demonstrators also accused officials of systematically alienating Iranian citizens of Arab ethnicity.

A cartoon show on television that was said to use figurines to misrepresent various ethnicities in Iran is what sparked the protests, and the government has been called on to issue an apology. Activists say that the demand has not yet been answered. However, this is not surprising to the locals, who say that the area is suffering from years of neglect by the regime in Tehran. They blame the government for the high unemployment, and criticize the regime’s discrimination against Ahvazi Iranians.

The protests continue in the Ahvaz region, as for the sixth consecutive night
demonstrations persisted in towns and cities with a majority of Arab Iranian citizens. Hundreds of people roamed the streets in at least four areas of Ahvaz, in the southern provinces. They are calling for an end to discrimination against Ahvazi Iranians, and criticizing the government for its policy to displace Arab Iranians and to dilute their ethnic identity.

Officials of the Iranian Radio and Television Corporation claim that they tried to speak to representatives of the demonstrators in an attempt to contain the tension, stressing “their legitimate and legal rights.” They say they have promised to follow up on the demands of the protesters, if the demonstrators will end the protests and return to homes.

On social media, activists uploaded videos of the protests. Some activists reported that Tehran has deployed police anti-riot units, as well as special forces and Revolutionary Guard units, to stop protesters. They said that Iranian police have arrested more than 100 protesters in sweeps that covered Ahvaz and Abadan.