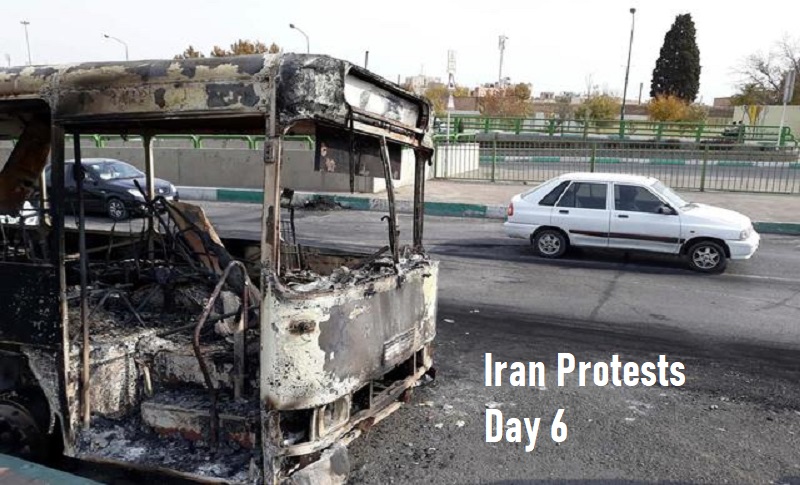 The anti-regime uprising in Iran continued for the seventh day on Wednesday, spreading to 140 cities, as protesters demand the overthrow of the Iranian regime and cite Supreme Leader Ali Khamenei, President Hassan Rouhani, and the Revolutionary Guards (IRGC) as the source of all the country’s problems.

This nationwide protest is continuing in spite of the brutal crackdown that has left at least 257 dead, 3,700 injured, and 7,000 arrested by the security forces., and the near-total internet outage enforced by the regime. Some Iranians have been able to get online using virtual private networks (VPNs) and provide us with this information.

The people have been attacking buildings and vehicles across Iran, linked to the regime or its suppressive forces.

In Varamin, they attacked a number of gas stations, while in Malard, protesters attacked banks, ATM machines and state buildings. In Islamshahr, the regime’s Bank Meli was torched, while in Shiraz, four centres affiliated with the regime were damaged.

Across Iran, especially in cities around Tehran, some 80 state-run chain stores were severely damaged by protesters.

There were clashes with security forces reported in Gorgan, Tehran, Islamshar, Mahshahr, Pakdasht, and Varameen, with many groups of protesters blocking roads, storming government buildings, and even taking over parts of the city.

In Islamshar, people have captured the police station after martial law was announced in Quds town.

The protesters were encouraged by a message from Iranian opposition President Maryam Rajavi who shared her support for the protesters and urged others to join them.

She wrote: “Look at the rebellious cities and this defiant generation and their battle. This is the true image of our people and our country.”

She advised that caring for the wounded and attending memorial services for those killed were also acts of defiance against the regime, before calling on the world to do more.

Hail to the martyrs of the uprising. Such unjust shedding of blood only adds to the resolve of the Iranian people to continue their rightful resistance to overthrow the mullahs’ regime. #Iranprotests #Iran pic.twitter.com/KgNxCc54KW

Rajavi wrote: “[The international community] should demand an immediate halt to the killings and arrests. If the regime does not comply, they must readily pull the trigger of UN Security Council sanctions. The UNSC must declare the regime’s leaders as criminals committing crimes against humanity. They must face justice for this massive suppression and bloodshed. The international community must strongly condemn the mullahs’ terrorism on the internet and assist the people of Iran in circumventing this inhumane blockade… The United Nations must immediately dispatch investigative missions to Iran to evaluate the number of those killed, injured and imprisoned.”