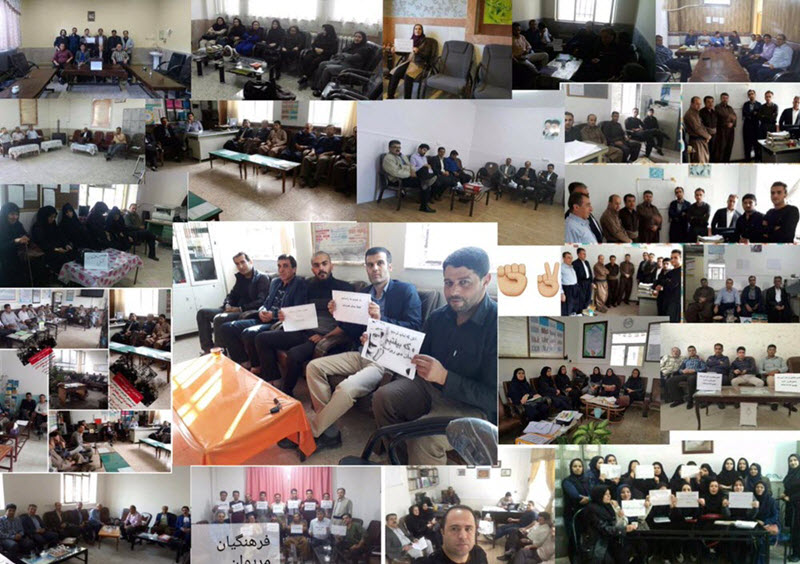 Teachers in Iran have been taking part in a two-day strike on 14th and 15th October. This is part of the dispute over budget cuts and teachers’ pay with the Ministry of Education. The Coordinating Council of Teachers Syndicates in Iran (CCTSI) had called on teachers to hold sit-ins at their schools and to cancel planned lessons on these two days.

At the same time, truck drivers in the country are also participating in a strike. The truck driver strikes are now in their third week.

The economic situation in Iran is getting worse and the people are having great difficulty in making ends meet. Good and services are becoming more and more expensive and even the most basic of amenities are now out of reach to many in the country. The national currency of Iran – the Rial – is losing value against the dollar and incomes are being drastically reduced.

The cost of education in particular is rising yet the quality of life for teachers is deteriorating. The majority of them are living below the poverty line.

The CCSTI said that the Iranian Parliament and government has a responsibility to respond to the situation and, because they haven’t, it is now time for the teachers to participate in a strike. The organisation said that it hoped the heads of the schools would give the teachers their support.

Several regime officials have said that the detained truck drivers that were arrested for striking should be given the death penalty. Fearing that the striking teachers would also be targeted by repressive forces, the CCSTI called on their peaceful protest to be allowed.

However, it also warned: “This October sit-ins are only the beginning: if we don’t see swift, constructive, and concrete changes to the pay slips of active and retired educational employees, and to per-capita funding of students, we will escalate our general strikes come November.”

The teachers are very dismayed that the regime is denying the people of Iran to the right for a free education to all. The price of school supplies is rising including stationary and books and more and more young people are unable to attend school because of this.

Mrs. Maryam Rajavi, President-elect of the National Council of Resistance of Iran (NCRI), the main opposition to the Iranian regime, praised all those people in Iran who were striking. She said that the unrest in the country shows how hated the Iranian regime is.

In a statement, Mrs. Rajavi said that teachers are taking action across the country “to protest their dire livelihood conditions, repression and security atmosphere in schools, and to achieve their trampled on rights”.

Public anger in Iran is on the increase and the people have come to realise that nothing will ever change for as long as the regime is in power. The repressive and suppressive policies will never be abolished by the regime so it is time for the people to take their future into their own hands.