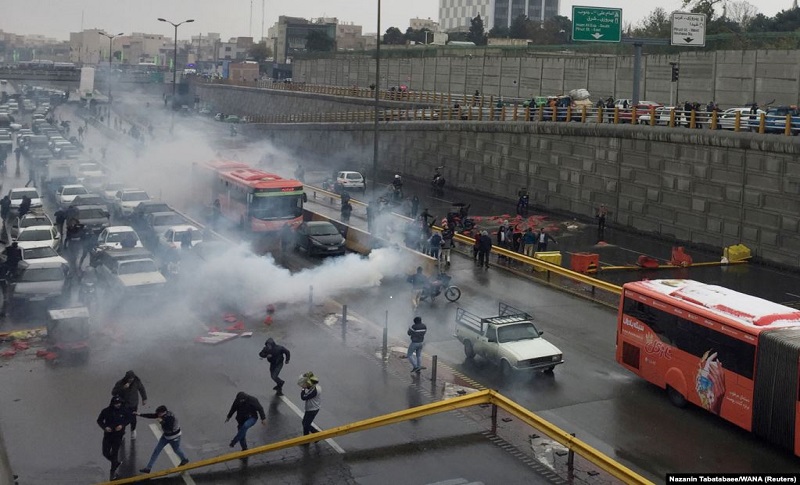 Protests have been spreading across Iran since the news that the government was increasing fuel prices by 300 per cent. The angry people of Iran have been confronted by suppressive and brutal security forces and they are making it clear that they will not accept the rule of the mullahs.

The price increase was approved by Supreme Leader Ayatollah Ali Khamenei. As with most decisions in the country, he has the final say.

The protests broke out on Friday 15th November and are still continuing. Reports from inside the country indicate the protests are intensifying and getting more violent in several cities.

The Trump administration has commented on the protests, condemning the violence that is taking place. The statement from the White House said that it supports the people of Iran in their peaceful protests and highlighted that the regime has let the people down.

The statement highlighted that the “proud nation” of Iran has been turned into an example of “what happens when a ruling class abandons its people and embarks on a crusade for personal power and riches”.

This is an accurate situation of what has happened. The mullahs ruling Iran have plundered the nation’s wealth. The economy is in tatters and more and more people are being classed as living in absolute poverty.

Protesters have been present in over 100 cities across Iran and it has been reported that there have been over 158 protesters killed because of the brutality of the security forces.

Protesters have also been burning photos of the Supreme Leader and chanting anti-regime slogans. The protests were sparked by the fuel price increase, but the sentiments behind them go much deeper. For decades the people of Iran have been oppressed and they have made it clear over the past few years that they want to take their future into their own hands.

The country’s Interior Minister has warned the protesters that they will face action by the country’s security forces. Abdolreza Rahmani Fazil slammed the protesters for the acts of “vandalism” that are taking place. Reports indicate that more than 100 regime centers have been destroyed.

In an attempt to suppress the protests, the Iranian government has implemented an internet service shut down. It has been reported that it has been an almost complete shutdown. It is also thought that there has been a cell phone shut down too.

The Iranian regime is desperately trying to diffuse the situation as it has acknowledged in the past that the regime will not survive another major uprising. The people of Iran almost succeeded in their quest for regime change back in 2009, but they ultimately failed because they did not have the backing of the international community. The support of the then US President (Barack Obama) could have made all the difference.