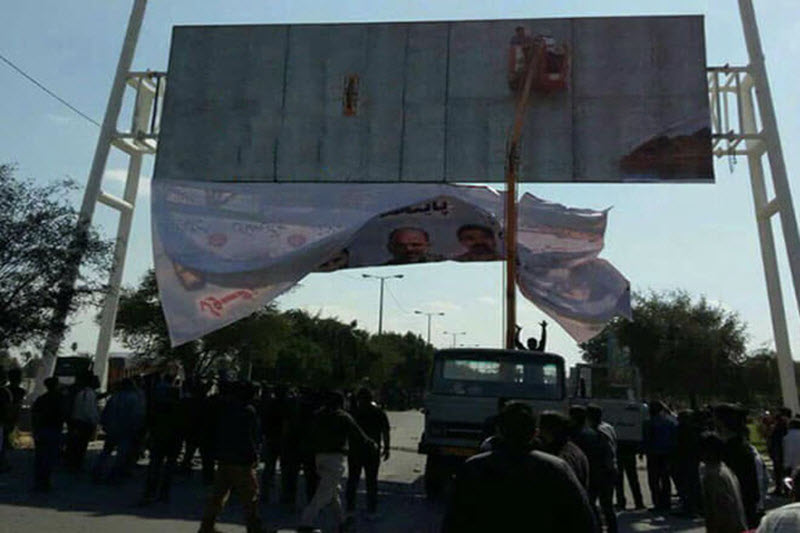 Angry Iranians in the city of Andimeshk in the southern province of Khuzestan have taken to the streets and brought down a large billboard that was put up by the Iranian regime to honour the so-called “shrine defenders” that were killed in Syria while fighting on behalf of the Assad regime.

Videos of the protesters pulling down and destroying the huge billboard have been shared across social media and the people are heard denouncing the Iranian regime’s involvement in the Syrian civil war.

Security forces arrived on the scene and tried to disperse protesters by using tear gas and by firing into the air. Protestors, however, were not deterred and reports indicate that they started to block the road.

Municipal workers had only installed the billboard early that morning and it very soon became clear that the people were not tolerating such a sickening display in their town.

The people of Iran have been protesting consistently since the end of 2017 and they have made repeated calls for regime change. They have denounced the regime’s meddling and interference in Syria and in other countries in the region and they have been heard chanting “Leave Syria and think of us”.

For years now, the people of Iran have been neglected by their government. Instead of concentrating on the many domestic issues that are affecting the lives of the people in the country, the regime has been plundering its resources on fuelling and sparking conflicts abroad. The people have had enough and they will not accept this any longer.

The Iranian regime has tried to deny that public dissent is widespread and it downplays the significance of the protests and anti-government demonstrations.

There are even rumours that authorities are saying that the protests in Andimeshk are based on where the billboard should be located in the town, and not on its content.

Domestic pressure is rising in Iran and the people are certainly going to be the main force behind eventual regime change. They almost achieved their goal during the 2009 uprising, but the silence of the international community failed them.

Things are different this time around because the international community is paying more attention to the situation in Iran. The Trump administration, unlike the previous administration under former President Barack Obama, is not turning a blind eye to the regime’s belligerence. Trump has vowed to tackle the problems head on and not shy away from the situation, and so far he has kept to his word. He pulled out of the Joint Comprehensive Plan of Action (JCPoA) and has reimposed tough economic sanctions.

The European Union, however, is lacking the same resolve. This is surprising considering the recent terrorist plots that EU intelligence agencies have foiled on European soil. The Iranian Resistance that has been backing the people for decades is calling on the EU to stop placing potential business and investment opportunities before the human rights of the people of Iran.

The regime’s belligerence cannot be ignored any longer.