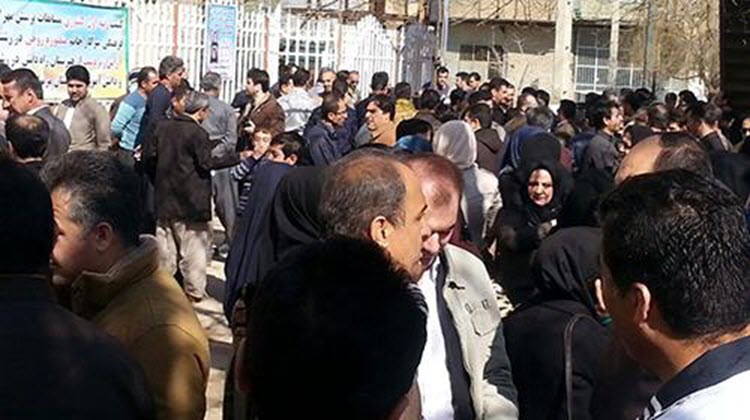 In protest against poor working and living conditions, the stolen money from Teachers Pension Fund, country’s deplorable educational status, and dealing with teachers’ protests as security threats, Iran’s working and retired teachers held rallies in different cities across the country on Thursday March 9, demanding that their problems be dealt with.

Gatherings of teachers on Thursday were held in front of regime’s parliament in Tehran, and the Department of Education in cities across Khuzestan, South Khorasan, Khorasan-Razavi, Kordestan, Ardebil, East Azerbaijan, Chaharmahal & Bakhtiari, and other provinces.

Iranian Teachers Trade Association Secretary-General, Esmaeil Abdi, who was repeatedly arrested and put behind bars by regime’s security forces, was sentenced to six years in jail last year by Tehran court of appeal. He’s been held in prison since November 9, 2016. In their gathering on Thursday, teachers also asked for Abdi’s release. “Teachers should be in classrooms, not prison”, was one of teachers’ slogans.

Teachers in many of their gatherings pointed out that their salaries are less than even half the poverty line.

“I scream, I don’t care what’s gonna happen, damn with these conditions, damn with this injustice” and “all they made were empty promises, all they said were lies and deception”, were some of the slogans written on placards teachers were carrying.