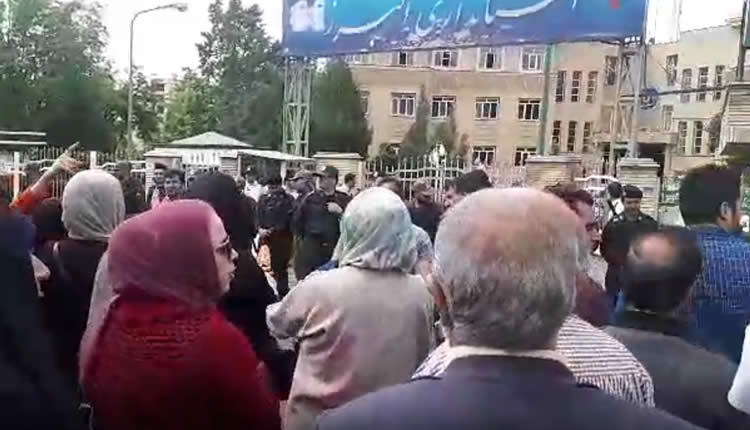 by Staff writer, SF
Educators from at least 32 cities across Iran took part in a national protest, on Thursday, against their low wages, lack of job security, scarce benefits, difficult livelihood, and the Iranian Regime’s utter contempt for their demands.

In Tehran, the protesters gathered in front of the parliament and the office for Planning and Budget Organization, chanting slogans like “Efficient insurance is our absolute right” and “Imprisoned teachers should be freed” and carrying placards that read “Teachers, Workers, Students, United” and “Access to quality, free and fair education is the right of all children”.
The Regime’s suppressive security forces descended on the rally, attacking protesters as part of an attempt to disperse the crowds, leading to a number of injuries, including the tearing of a female teacher’s eye.
The mercenaries attempted to stop news of the protest – and their reaction to it – from spreading, so they arrested dozens of people and seized their mobile phones.

In other parts of the country, the protests were held in front of the local branch of the General Directorate of Education. This included:
•Kazeroon, where teachers chanted “Teacher dies, but does not accept discrimination” and held up signs that read “The teacher’s place is in the classroom, not in prison”
•Sari, where teachers chanted “Salaries above poverty line is the right of teachers and retirees” and “Standard schools are the right of students and teachers”

In a statement, The National Council of Resistance of Iran, said: “While saluting the working and retired teachers and educators, the Iranian Resistance calls on all the people, especially the youth, to show their solidarity with the educators who are deprived of their most basic rights and live in a very difficult situation. The unity of all oppressed walks of society guarantees Iran’s liberation from the misery of the mullahs’ regime and the establishment of democracy and freedom and well-being for all the people of Iran.”
These protests are just further evidence that the Iranian people are keen to rise up against the Regime and hold the mullahs to account for their crimes.

A nationwide protest movement began in December 2017, when Iranians took to the streets to protest a draft bill that cut subsidies for the poor and increased military funding. It is still ongoing despite over 8,000 arrests and the deaths of dozens of protesters at the hands of the Regime’s agents.