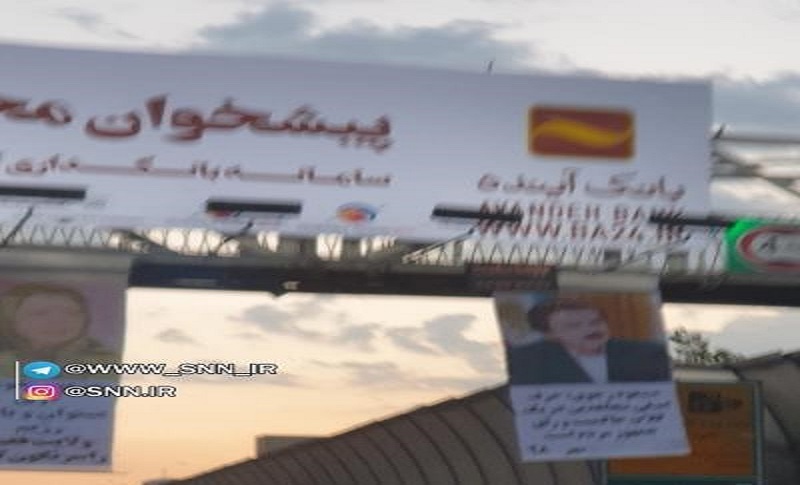 The defiant and brave young people of Iran have stepped up their resistance against the mullahs’ regime in Iran over the past few weeks, culminating in the burning of posters and buildings associated with the clerical regime over the period of October 3-5. Their actions have become so widespread that even the mullahs’ regime has been forced to admit, through gritted teeth, the power of the people.

The government-run website Khabar-Fouri (Breaking News) published, on October 4, two pictures of posters of the Iranian Resistance’s Leadership that were put up in the Gisha district of Tehran by the Iranian people.

In the photos, can also be seen quotes from both leaders about the struggle for freedom in Iran. Under the Massoud Rajavi poster is the quote, the “Mujahedin’s main argument, in short, is the people’s sovereign right and vote”, which displays how the Iranian people want free and fair elections. Under the Maryam Rajavi poster is the quotation “we must and we can overthrow the Velayat-e Faqih’s regime (absolute clerical rule)”, which shows the Iranian people’s desire for regime change.

Maryam Rajavi took to Twitter to praise the young people for their actions and encourage others to do the same
She wrote: “Such a beautiful future is very distant from today’s abysmal situation in Iran, but it is achievable, and I urge every one of you, the aware and freedom-loving students and youths who seek equality, to join the struggle to achieve it.”

Such a beautiful future is very distant from today’s abysmal situation in #Iran, but it is achievable, and I urge every one of you, the aware and freedom-loving students and youths who seek equality, to join the struggle to achieve it.

Of course, this is not the first of recent protests by the young people of Iran who are desperate for change.

The National Council of Resistance of Iran (NCRI) wrote: “Since the start of the new school year two weeks ago, hundreds of large posters of Iranian Resistance’s Leadership with calls for uprising and overthrow of the mullahs’ regime have been posted in different cities in Iran. Defiant youths have also torched dozens of symbols and centers of mullahs’ regime in cities across Iran.”

This is not surprising given how young people are often dealt the worst hand in Iran, with many girls and minority students prevented from attending school by the wrongful policies of the Regime. Some minority students are banned from attending school, many families are forced into poverty and have to send their kids to work, while many girls are denied access to education without permission from a male relative.