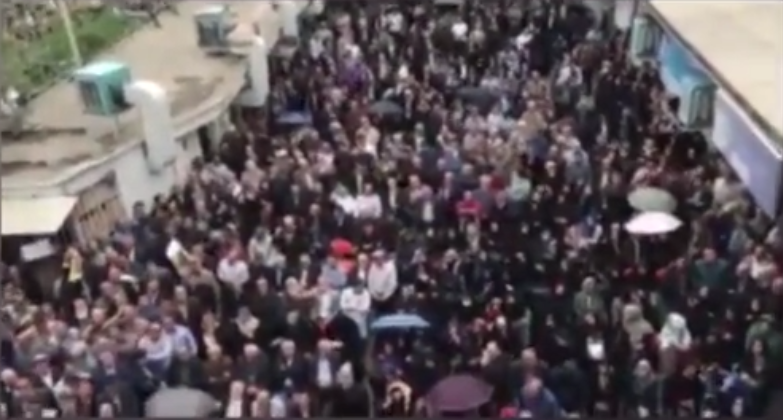 Last week the Iranian streets were the scenes of protests and anti-regime activities in Tehran and other Iranian cities. Workers planning a rally in the capital, in front of the Majlis. but were denied permission. However, a large number of the workers still made it there and many people came out to support them.

In his article for Arab News, Dr. Majid Rafizadeh, Iranian-American political scientist, expert on Iran and US foreign policy, and president of the International American Council writes, “This highlights the fact that many Iranians have become so disaffected and frustrated with the authorities that they are willing to risk their lives by taking to the streets and protesting. People of all ages and social classes appear to have overcome their fears regarding the regime’s warnings.”

The regime repeatedly demonstrates that it believes that using force against protesters is effective. Security forces dispersed the demonstrators and the Basij forces clashed with many protesters. Still, the protests contintue, and they are not limited to Iran’s capital. There are gatherings and clashes in several other cities, including Isfahan and Saqqez in Iranian Kurdistan.

The protesters are angry over economic difficulties. The government seems unwilling to address their citizens’ underlying problems and satisfy their demands. Dr. Rafizadeh writes, “Since January’s widespread and nationwide demonstrations, when tens of thousands of people took to the streets across Iran’s cities, the Iranian leaders have not taken any concrete steps to tackle the issue.”

He says that the leadership instead plays the blame game or resorts to empty rhetoric. President Rouhani continues to boast that his government has reduced inflation and is helping the economy. The reality, according to Dr. Rafizadeh, tells a different story. He says that some Iranians believe that Rouhani has been more detrimental to their economic situation than his predecessor, Mahmoud Ahmadinejad.

The unemployment rate remains high, as skilled and educated Iranians cannot find a job. Inflation is a major problem, with food, housing and healthcare extremely
expensive for ordinary Iranians. Chants such as “astronomical wages (for senior officials), public misery” reflected these issues, at the latest protests. Workers carried placards saying, “Our dinner table is still empty,” and one read, “Hey, you, billionaire minister, I haven’t been able to buy meat for the past 40 months.”

Meanwhile, according to official figures, Tehran’s military budget saw an unprecedented increase of 145 percent during the first four years of Rouhani being in office.

Political demands were also voiced by protesters, particularly after the arrest of several of demonstrators. Many people were chanting, “Arrested workers should be freed,” and “Bread, housing, freedom, are our inalienable rights,” as well as “Worker, teacher, student, solidarity, solidarity.”

Dr. Rafizadeh points to the National Council of Resistance of Iran (NCRI) and the People’s Mojahedin Organization of Iran (PMOI/MEK), the largest and most well organized of the opposition groups. They boast a large network inside the country, and were active through their networks in the run-up to the protests. He writes, “Iran’s history in the last century reveals that its society is not unfamiliar or fearful of an uprising and changing a political establishment when the leadership ignores people’s socio-political and economic needs.”

Cracking down on the protesters will not eliminate the underlying causes of the citizens’ grievances. Tangible steps must be taken to adequately satisfy the economic needs and address the political grievances of its people, or else people’s frustrations may endanger the ruling clerics’ the hold on power.