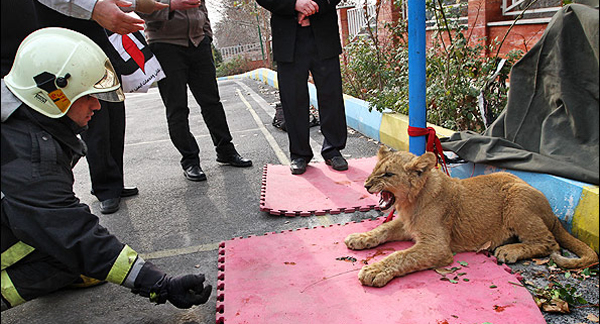 Stop Fundamentalism – A lion cub weighing 50 Kilograms was found in Iran’s capital city, Tehran today, reported Mehr news agency.  The cub was captured by Tehran’s fire patrols and will be given to a public park facility later on.

The cub was spotted playing in the trees near Lavizan by a truck driver who later informed the authorities.   Finally fire trucks were called in to deal with the situation.

This is the second lion cub captured by authorities during the past two days.

Iranian officials have no explanation for the cubs being found in the area.  The Larger Tehran city cannot really be described as a living habitat for this type of wild animals.

The lion cubs are currently kept in a fire station and will be transferred later to a zoo facility in Tehran.

With two lion cubs being found in two consecutive days, Iranian officials believe that the animals have been smuggled into the country.

“We have had an increase in smuggling of animals into the country in recent years,” said an Iranian Environment official to reporters. “It is possible that these lions have been smuggled into the country and sold to a person who wasn’t able to take care of them and had to let them go.”