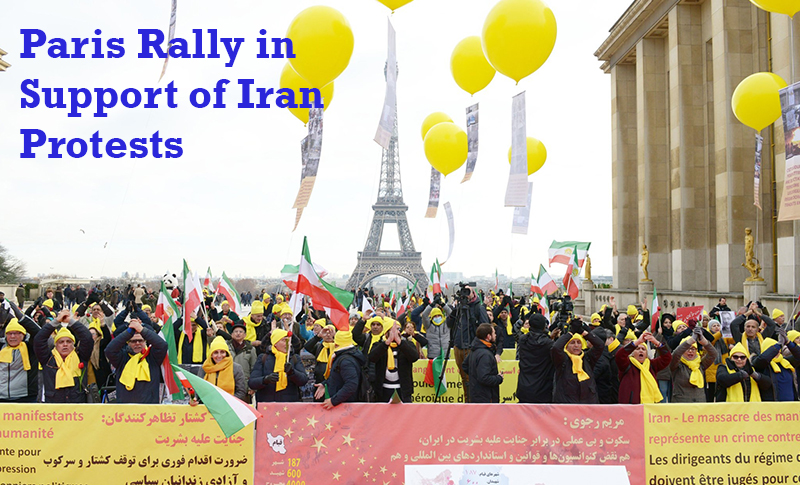 According to the sources affiliated with the People’s Mojahedin Organization of Iran (PMOI), inside the country, the Iranian regime has reportedly killed more than 600 people during the uprising so far, wounded more than 4,000 and arrested more than 12,000. Besides, the regime is still maintaining the internet blackout in many areas.

On Monday, supporters of the Iranian Resistance, in a rally, announced their solidarity with the uprising of the Iranian people to overthrow the mullahs’ regime. They also demanded the assembly of an international investigation delegation to visit Iranian prisons and prevent the massacres of thousands of protesters who have been arrested in the past weeks.

#Iranians in #Paris have gathered to call on the international community to put pressure on the dictatorship ruling #Iran to #StopIranBloodshed #FreeAllProtesters #IranProtests #MEK pic.twitter.com/jHC3lAasYm

Mrs. Maryam Rajavi, president-elect of the National Council of Resistance of Iran (NCRI), sent a message to the demonstrators in Paris and said: “The blood of over 600 rebellious youths, the cries of 12,000 arrested youths detained in Khamenei’s torture chambers, and the cries of a rebellious nation from across Iran call on the world to stand up to the religious fascism.”

The blood of over 600 rebellious youths, the cries of 12,000 arrested youths detained in Khamenei’s torture chambers, and the cries of a rebellious nation from across #Iran call on the world to stand up to the religious fascism. #IranProtests pic.twitter.com/HYgtQz5noJ

The Iranian opposition leader said: “This uprising is durable and the regime is not able to contain the protests and prevent the rising of rebellious cities, the resistance units and the great Liberation Army.”

I salute you all who have found defense of freedom and democracy and defense of human rights in supporting the #Iran uprising. #IranProtests pic.twitter.com/1eD5qOE0MD

Demonstrators in Paris stressed that the November 2019 uprising made it clear that there are no moderates in Iran. They held pictures of the uprisings and the Iranian flag, marching through the central streets of Paris while chanting slogans in support of Iran’s protesters.

#Iranians are criticizing the international community’s inaction regarding the continuous #HumanRightsViolations against the #Protesters by the ruling dictatorship in #Iran. #FreeAllProtesters #IranProtests #StopIranBloodshed pic.twitter.com/gQKmLZ4tFA