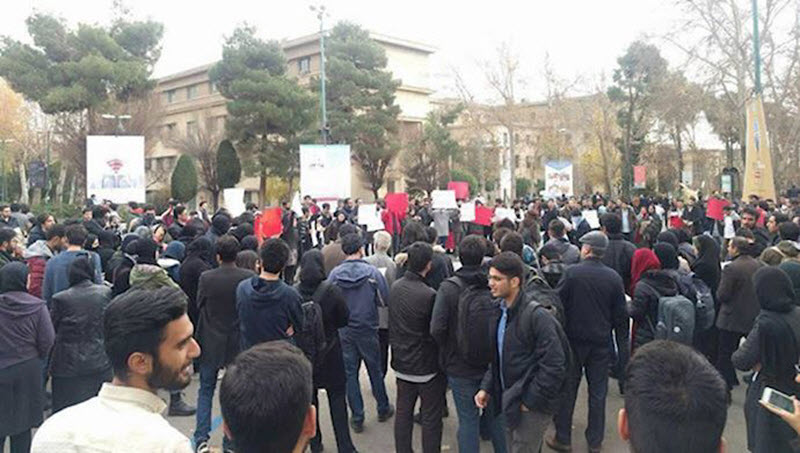 On May 13th, plainclothes members of Revolutionary Guards (IRGC) Basij went head to head with Tehran University students who had gathered to protest the forced hijab laws at the universities.

The protesting Tehran University students were attacked as they gathered in protest the new regulations imposed on campus.

Tehran University student gathered in protest to the repressive plans for “chastity” — forcing all women to wear the hijab in public, including the universities. The students carried signs that read, “Freedom is our rightful choice.” They chanted, “Students will die, but will never accept abjection.”

Videos from Tehran University were posted online, showing security forces attacking the peaceful demonstration. It’s believed that this was an attempt to prevent the spread of protest to other parts of the city.

A whole new level of animosity toward the system sprang up after the 2009 protests. Students today demonstrate in solidarity with workers’ strikes, was well as protests by teachers, nurses, truck drivers, bazaar merchants, and poverty-stricken farmers. In fact, during the January protests that shook Iran, students were among the first to distinguish between the Iranian people and the regime in its entirety. They chanted, “Reformists, conservatives, the game is over.” This chant became the slogan for what many Iranians hope will be the end of the regime. The slogan confirms that, for the people, the Islamic Republic of Iran is about to crumble, after 40 years of inflicting poverty and suppression on its people.

The gathering began in the morning, when students accused the university’s Regulations Committee of imposing repressive rules. The Students continued their protest in the auditorium of the School of Fine Arts. They demanded answers from the president and vice president of the university. Instead of answers, they were attacked by Bassij forces who brutalized them.

The students were also angry about unemployment and the abuse of women. State-run ISNA news agency reported that the students had previously held a campus protest against authorities’ increasing pressure on women to wear mandatory headscarves in public.

The university’s vice-chancellor, Majid Sarsangi, was cited by ISNA as saying that,“There has been no change in the university’s dress code.” Student’s claims of “Dress Code Patrols” at the university, were also denied by Sarsangi, who added that “disciplinary forces warned students to respect the rules about Ramadan.”

Tehran University students say that they have witnessed a growing number of IRGC Basij members deployed to the campus over the past few weeks, accompanied by plainclothes intelligent agents. Allegedly, Security forces were also stationed across the campus to enforce disciplinary rules and to terrorize the students, especially the female students.