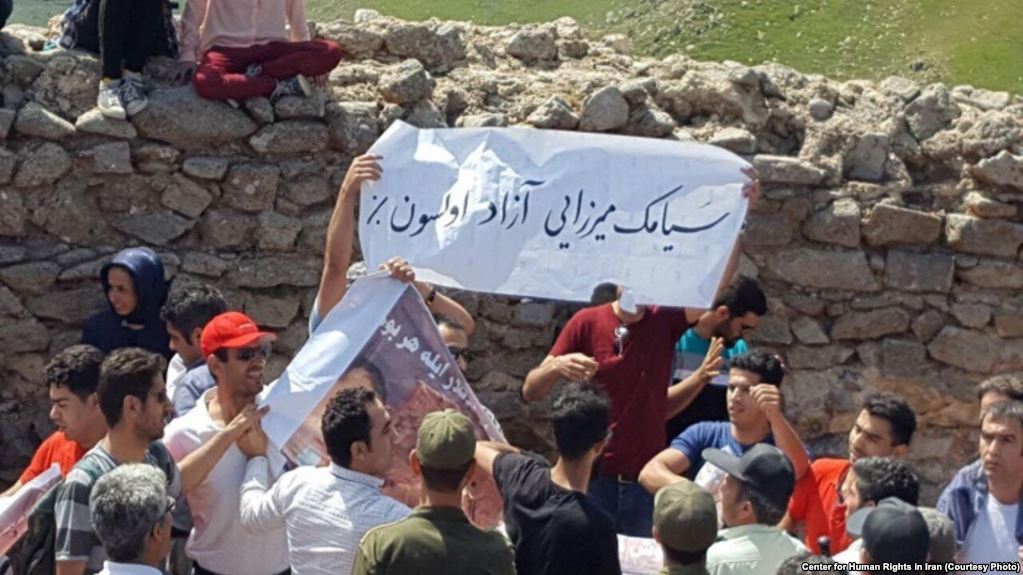 by Staff writer, SF
The overall situation in Iran is deteriorating significantly, with more protests springing up over diverse issues every day, and, as always, it is the marginalised groups that suffer the most.
Most recently, we have seen intense protests over water shortages in southern Iran and the Regime responding with yet more repression. But the Regime’s suppression is not just centred on one group, instead it is spread across the country.

In northwest Iran, there are roughly 25 million Azerbaijanis, who are denied their most basic rights, even the right to learn in their native language. The restrictions on them have only intensified in the Regime crackdown over the ongoing protests.
Over 50 Azerbaijani activists were arrested by the Regime, when they tried to take part in the annual protest rally over the Regime’s discrimination of them, in Babak Fort in eastern Azerbaijan province.
It is obvious that the Regime wants to stop the protest – as they do all of the protests in Iran – so they used mass arrests and intimidation. Despite this, many reached the fort to continue their protest, but the Regime still arrested the demonstrators afterwards. Yashar Hasanpour was arrested in his house in Tabriz, when he returned from the protest.
A campaign has started on social media, demanding the release of the protesters with the hashtag ‘Free Turk Activists’, as many other Iranians have been forced to do before them. Although, it’s important to note the paid Regime trolls are co-opting the hashtag to try to spread divisions among the Iranian people on ethnic grounds and paint these activists as not true Iranians.
There are also reports of the Iranian Regime torturing activists in the Ardabil prison, which fits in with the Regime’s reaction to detained protesters in recent months. While about 30 of the protesters have been released so far, almost all of them show signs of torture an nothing is known about those still detained.

Ali Hajizade, a political analyst and founder editor in chief of thegreatmiddleeast.com, wrote on Al Arabiya: “Iranian authorities [are] actively try[ing] to shut the minorities up. The Azerbaijani population is posing a serious threat to the regime because of its large number. Also, Turkey and the Republic of Azerbaijan are situated near the borders, densely populated by Azerbaijanis. I believe that the regime’s repressions against minorities will only increase in the coming months.”
All in all, Iran will not be a free place for ethnic and religious minorities, and indeed, all Iranians, until the Regime is brought down by the people of Iran.