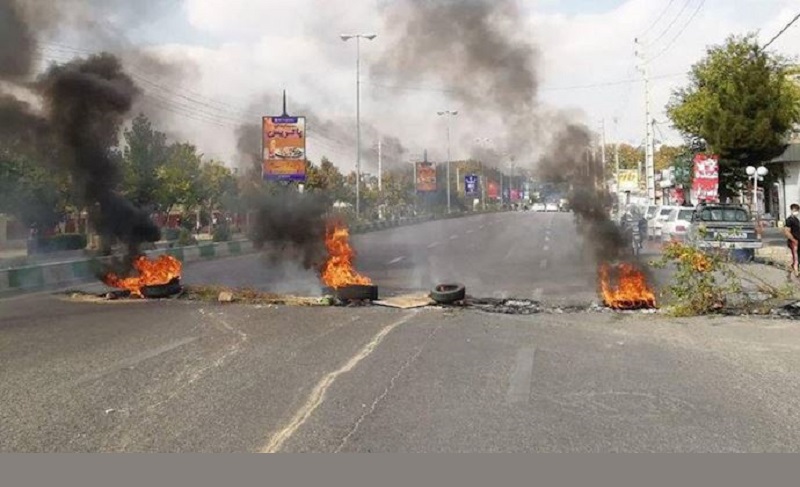 There are now over 130 Iranian cities involved in the nationwide protests that began Friday in response to a major hike in gas prices by the regime. These protests began over an economic matter but quickly became political with the demonstrators calling for regime change in their slogans and their chants, specifically targeting Supreme Leader Ali Khamenei, President Hassan Rouhani and the Revolutionary Guards (IRGC).

During the fifth day of protests on Tuesday, protesters became more defiant against the regime’s suppressive agents, continuing to blockade roads, and attack regime buildings. All of this was happening and being reported on whilst the regime enforced a “near-total internet shutdown”, which internet freedom group NetBlocks said had been in place for 75 hours by 10 pm CET on Tuesday. Thankfully, some Iranian had found ways around the shutdown, but NetBlock said this was a violation of the Iranian people’s “rights to free expression and free assembly” as it left Iranians “isolated from the rest of the world”.

Let’s look at the day in detail.

Protesters blocked numerous roads in Rasht, as protests continued there.

In Kermanshah, demonstrations were held in Dowlatabad Boulevard and the Dieselabad district, where young people clashed with the security forces. Here, a number of banks and administrative buildings were set on fire, three members of the state police were killed, and a number of Revolutionary Guards (IRGC) Basij members were injured.

Demonstrators set fire to the regime’s judiciary building and a police station in Nasim Shahr and the security forces were seen fleeing the area.

In Kazerun, protesters torched a regime centre and attacked a number of local mullahs. Tanks were dispatched to various areas of unrest throughout the city, but even they could not disperse the crowd.

In Tehranpars, Tehran, protesters have made teams of seven or eight people to launch demonstrations and clashes against the security forces.

In Mahshahr, six IRGC Basij members were killed by protesters.

Basij chief Gholamreza Soleimani said: “Cells of sedition were established on Saturday, November 15. The [Iranian Resitance] have cells in our country and other countries, and they are striking blows to our interests.”

On Monday, outside of Iran, Iranian Resistance members and supporters held protest in Berlin, Rome, London, and Washington DC in solidarity with the nationwide uprising in Iran against the mullahs’ regime.

The clerical regime is making all its effort and using all its means to conceal the actual death tolls. The United Nations must immediately dispatch investigative missions to #Iran to evaluate the number of those killed, injured and imprisoned. https://t.co/ecc6wi8aoz