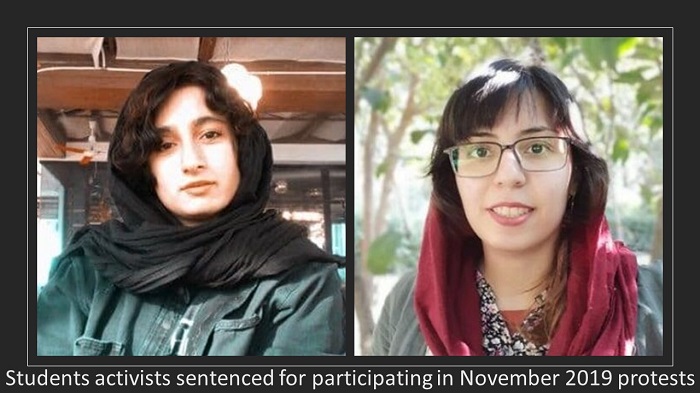 The Women’s Committee of the National Council of Resistance of Iran (NCRI) reported that many Iranian student activists sentenced for participating in November 2019 protests.

The People’s Mojahedin Organization of Iran (PMOI / MEK Iran) and National Council of Resistance of Iran (NCRI) sources in Iran report numerous human rights violations over the past few months as part of the regime’s crackdown on political dissent. The regime has responded to widespread calls for the overthrow of the clerical dictatorship with mass arrests of protesters, torture of political prisoners, and the systematic targeting of (PMOI / MEK Iran) members and supporters.

Marjan Es’haghi, a student of political sciences at Tehran University, received a total of five years’ imprisonment for participating in the November 2019 protests.

Why support this repressive regime?

Stand with the PEOPLE OF IRAN and not the mullahs!

The Revolutionary Court of Tehran sentenced Marjan Es’haghi to 1 year in prison and 4 years of a suspended jail sentence on November 11. Marjan Es’haghi was arrested after participating in a student gathering at Tehran University on November 17, 2019, as she was leaving the campus.

Agents of the Revolutionary Guard’s Intelligence took her to Ward 2A of Evin Prison which is the IRGC’s detention center. On December 4, 2019, the IRGC released her on bail after 18 days of interrogation, until the completion of the legal procedure. Ms. Es’haghi is charged with “assembly and collusion against national security.”

Handing down prison sentences for participants in the November 2019 protests is part of the regime’s efforts to prevent outbreaks of protests. The clerical regime’s Intelligence Ministry has also launched a new wave of arrests over the past week in various cities of Iran, arresting former political prisoners and summoning others to report to prison.

Intelligence agents arrested Soha Mortezaii on November 17, 2019, during the November 2019 protests. They interrogated her in Ward 2A of Evin Prison and set a bail bond of 500 million tomans for her.

She protested the bail by going on a hunger strike because her family did not afford to pay it. On the tenth day of her hunger strike, prison guards took her to Qarchak Prison in Varamin. She was ended her hunger strike after 22 days on January 12, 2020. She was finally released temporarily on January 22, 2020, until the final disposal of her verdict and after depositing 500 million tomans of bail.

The court had convened on September 9, 2020, to examine the charges leveled against student activist Soha Mortezaii.

Soha Mortezaii was the secretary of Tehran University’s Student Council.

She was deprived of continuing her education for a Ph.D. in political sciences and international relations. In October 2019, she held a 21-day lone sit-in strike on the campus of Tehran University in front of the central library.

Tehran University authorities pressured Ms. Mortezaii’s mother to threaten to take Soha to a psychiatric hospital if she continued her sit-in.

Student activist Soha Mortezaii who has a Master’s degree in anthropology had also been arrested during the protests in December 2017-January 2018. Also in February 2015, she was arrested along with a number of other student activists of Amir Kabir and Allameh Tabatabai universities in Tehran, when she was detained for two months.

Mrs. Maryam Rajavi the President-elect of the National Council of Resistance of Iran’s (NCRI): Emphasizing the need for international campaigns to release detained students and other arrestees, I call on international missions to visit Iranian jails, and the UNSR to visit political prisoners in Iran.

Another scene from today's #IranProtests at Sharif University of Technology in Tehran. Chants of "Honorable students, strike, strike".