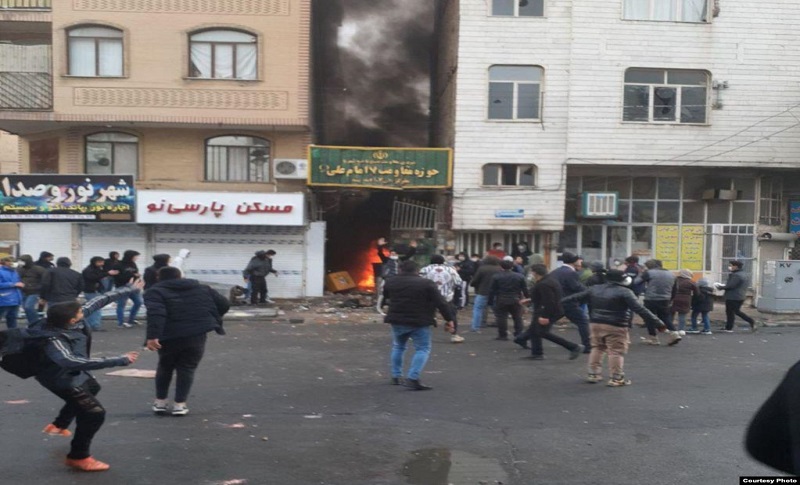 Anti-regime protests erupted across Iran on Friday after the mullahs tripled fuel prices and, despite a sustained crackdown by the authorities, they have continued throughout the weekend, the People’s Mojahedin Organization of Iran’s (PMOI/MEK) ‘Resistance Units’ has been largely coordinating the protests and providing photos and videos from the scene, despite the shutdown of the internet in many places.

Maryam Rajavi, the President-elect of the National Council of Resistance of Iran (NCRI), hailed the Iranian people for rising up against the mullahs’ corrupt and criminal regime. She urged all young Iranians to support the protesters and emphasised that the only way to remove high prices, poverty, inflation, and everything else that the mullahs have inflicted on Iran is to remove the Iranian regime from power.

She said: “The economic lifeline is controlled by [the regime’s Supreme Leader] Ali Khamenei, Hassan Rouhani and the billion-dollar thieves working with them. They pillage the people’s wealth for warmongering [and] unpatriotic nuclear and missile [programs].”

This regime must be banished from the international community and Khamenei, Rouhani, and other regime leaders must face justice for committing crime against humanity. #NoImpunity4Mullahs #IranProtests #Iran

Protesters in Tehran torched a bus that belonged to the regime’s oppressive anti-riot units. They also blocked roads in the Andisheh district, blocked Lalehzar Street while chanting “Death to the dictator”, and blocked the Niyayesh Highway. Elsewhere in the city, university students rallied in support of the protests and the Tehran Grand Bazaar merchants went on strike.

While in Karaj, protesters forced the regime’s forces back, blocking the road and chanting “Mullahs must get lost!”.

In Kermanshah and Pardis, the regime’s oppressive forces intensely attacked the protesters, while in Shiraz, protesters blocked the roads and actually took over various parts of the city, chanting “Down with Khamenei” and “Mullahs must get lost!”.

In Sanandaj, heavily armed anti-riot forces patrolled on motorcycles to spread fear but this had zero effect on the people.

In Tabriz, students held a demonstration in support of the protests, where they chanted: “Don’t be afraid, we’re all together” and “Students, workers, unity!”

In Shahriar, protesters began chanting “Mullahs must get lost!” and blocked roads, while in Bushehr, protesters blocked the road with burning tires.

Regime atrocities over the past 3 days are undoubtedly a manifest case of crime against humanity. Those responsible have in the past 4 decades perpetrated crimes against humanity, including 120,000 political executions, and the massacre of 30,000 prisoners in 1988. #1988Massacre

To read about Friday and Saturday’s protests, click here.