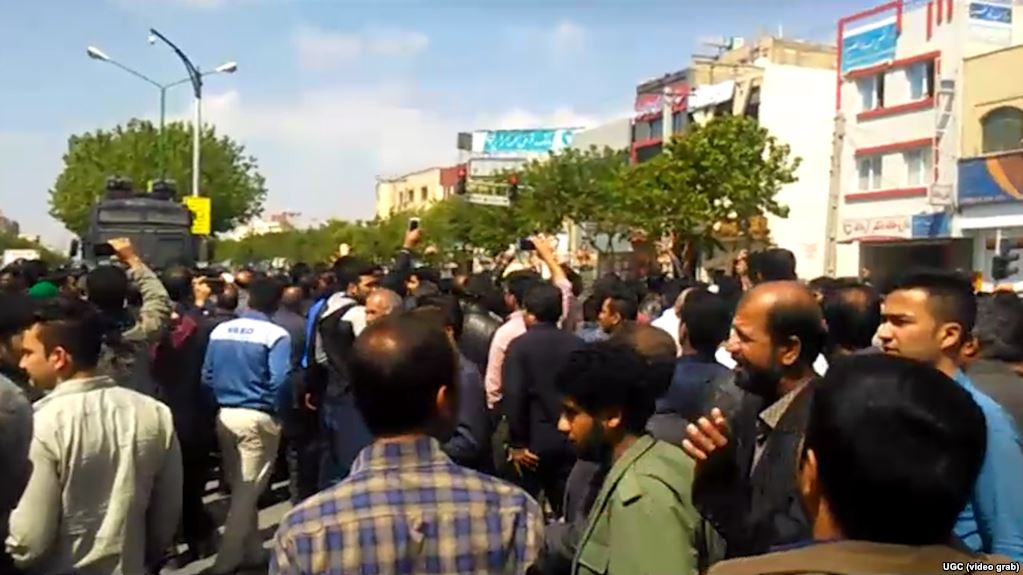 by Navid  Felker
As the year turned for 2017 to 2018, massive protests erupted throughout Iran. They began in the northeastern holy city of Mashhad, the second largest city in Iran, and spread across the county at a shocking pace.

Prices of basic staples sparked the uprising, but it became political in a matter of just a few hours. It quickly became evident that this was more significant than a protest, but instead a reflection of deeper, more profound anti-regime sentiments.

Tehran responded to the uprising with brutality. Officially, 22 protesters were killed. The National Council of Resistance of Iran, however, says that some 50 protesters were killed. According to the head of the Prisons Organization, they registered 4,972 arrests. Again, the opposition put the number of detainees at closer to 8,000 and this may be a conservative estimate.

On January 31 and February 1, protests and strikes by laborers and victims of theft and fraud by state institutions broke out again, with similar slogans that rejected the regime in its entirety. The protests caught most experts and Iran analysts in the West by surprise.

During the major annual international rally of the opposition in Paris on July 1, 2017, Maryam Rajavi, the President-elect of the National Council of Resistance of Iran said, “The light of change is shining on Iran. The ruling regime is in disarray and paralyzed as never before. Iranian society is simmering with discontent and the international community is finally getting closer to the reality that appeasing the ruling theocracy is misguided.”

Mrs. Rajavi’s observations speak to three fundamental truths related to obtaining freedom and liberty in Iran, as well as peace and tranquility in the region:
•First, the overthrow of the ruling religious dictatorship is an imperative.
•Second, the regime’s overthrow is within reach.
•And third, a democratic alternative and an organized resistance exists which is capable of toppling the theocracy in Iran.

The protests began in the holy city of Mashhad, and some of the strongest slogans on the first days of the protests were chanted in Qom, the other Iranian holy city. These two cities are traditionally perceived as bastions of clerical rule. The majority of those engaged in the uprising were from poor and underprivileged backgrounds — people who were tired of their circumstances and angry at the regime. People from all social strata took part in the protests, and young men and women, particularly the youth, played a key role. Most of them were Dahe Haftadi, which is the term used in Iran to refer to those who have been born in 1990s. The regime estimated that 50 percent of those who were detained were between the ages of 19 and 25, and 27 percent were between 25 and 32.

Protesters’ slogans — ‘down with Rouhani’ and ‘down with Khamenei’ – demonstrated rejection of the status quo and the regime. The slogan ‘no to reformer, no to hardliner, this game is over’ expressed a new awareness that differences between political factions in Iran are distinctions without a difference.

Social media played a key role in organizing and also keeping the activists aware of developments in other locations, towns and cities. As of July 2017, there were 48 million smart phones in Iran, a country of 80 million people. In Iran, Telegram has more than 40 million users. Telegram has about 100 million users worldwide. An average day more than 3 million messages are exchanged.

The role of women in the uprising was quite dramatic and remarkable. The video clips coming from Iran showed that women were at the forefront in many scenes and took the lead in charging at the security forces. A scene of a young woman standing at arm’s length from the guards and security forces in Hamedan and shouting in their faces “Death to Khamenei,” went viral on social media.

President Trump in his State of Union address stated, “When the people of Iran rose up against the crimes of their corrupt dictatorship, I did not stay silent. America stands with the people of Iran in their courageous struggle for freedom.”

Le Monde, the prominent French daily wrote in an article on March 3, 2018, “In Iran the fear has changed camp and the people are no longer fearful of the regime.”

The role of the People’s Mojahedin Organization of Iran, also known as the Mujahedeen-e- Khalq (MEK) was important. It is the leading Iranian opposition group and its existence in the Iranian political landscape predates the clerical regime. Over the years, the MEK made key revelations on some of the regime’s most secret aspects, including important secret nuclear weapons sites and research facilities. The intelligence gathered by MEK operatives inside Tehran was ultimately corroborated by the UN watchdog, the IAEA.

The opposition appeals to the Iranian diaspora. The overwhelming majority of the Iranian diaspora is comprised of Iranians who fled Iran after the establishment of the clerical regime or were born elsewhere. Expatriates throughout Europe, North America, Australia, and even Asia are in constant contact with their homeland.

In April and May 2017, in the run-up to the Iranian presidential elections, the MEK’s activities entered a new phase and activists started to systematically place pictures of Maryam Rajavi on major highway overpasses and on walls beside major streets. Video clips showed banners and pictures of Rajavi placed in major cities including Tehran, Mashhad, Kermanshah, Shiraz, and Hamedan, as well as in some of the smaller provincial cities.The network also became active in exposing Ibrahim Raissi, one of the two leading candidates who was one of the key officials involved in the 1988 massacre in Tehran.

As the protests broke out, the MEK network was the first that broke the news and started sending updates and video clips from the protest scenes. The MEK network distributed news and clips that it received from its activists. The MEK network’s persisted despite all the restrictions that Tehran imposed on the Internet and popular social media apps.

A number of MEK activists spoke to major international media from Tehran and from smaller towns. For instance, Nik, a female MEK activist was interviewed by Fox News on January 10th while protesting with hundreds of relatives of detainees in front of the notorious Evin Prison in northern Tehran.

“Calls were given on our Telegram channels a few days before the demonstrations,” Mohammed, a 29-year-old engineering student from Tehran, and a MEK activist, told the UK’s Daily Telegraph on January 6th, “We cover every protest, no matter how small. Some of the slogans that were shouted on the first day and were repeated were started by our friends on our networks,” he added.

The regime has repeatedly underscored the role of the MEK. Hassan Rouhani called French President Emmanuel Macron on January 2and said the MEK was behind the protests in Iran and asked him to restrict the activities of the Iranian opposition. The National Council of Resistance of Iran, the coalition that the MEK is its biggest constituent, is headquartered outside of Paris.

In a speech on January 9, Khamenei said, “These incidents had been organized.” He added, “The MEK had prepared for this months ago” and “the MEK’s media outlets had called for it.”

The opposition has been advocating for establishing secret centers of resistance in an attempt to unleash the potential of a disenchanted population that is willing to stand up to clerical rule, and to use the simmering situation in Iran in preparation for an uprising.

Tehran is facing serious financial, political and social challenges. Their policy of intervention in the region has exhausted its resources. The factors that led to the protests still exist, and the regime seems not have the power to address and solve them.