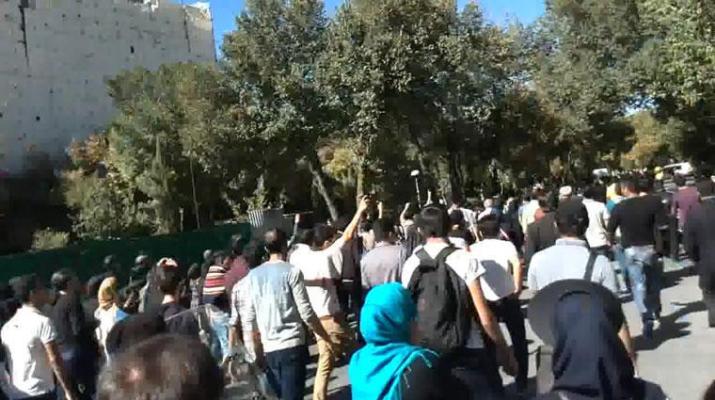 by Saeed
The Iranian Regime was shocked by Donald Trump’s announcement that he would withdraw the US from the 2015 nuclear deal signed between Iran and six world powers, formally known as the Joint Comprehensive Plan of Action (JCPOA).

Essentially this changed the game, not just for Iran, but also for the European leaders who are struggling to save the deal and prevent their companies from being hit by US sanctions. It also helped show the Iranian people, who have put up with the Regime for nearly 40 years that the US is on their side.

Uprising
Earlier this year, Iran had erupted into protests that began over a draft budget, but quickly became an overall revolt against the Regime as a whole that spread across 142 cities and shocked even those with knowledge of Iran. The people were loudly and clearly rejecting the Iranian leaders for their human rights abuses, their funding of terrorism, and their malign expansionism.
Of course, the Regime didn’t just sit idly by. They cracked down violently on protesters, killing 50 in the streets, arresting 8,000, and killing at least 12 more in prison. They also blocked access to certain apps or websites to limit communication between the Iranian people and the outside world, as this not only assisted the protesters but it also allowed the world to see inside Iran.
The protests didn’t stop, however, and there are thousands of protests or acts of civil disobedience carried out by the Iranian people every day. Let’s look at some of the biggest since April.
On April 9, residents of Khuzestan province protested after state TV aired racial insults against them.
On April 15, farmers in Isfahan protested water mismanagement that was bankrupting their farms. The water problems were partially caused by the mullahs diverting water to an ethnically Persian province.
In Kazrun, the Iranian Revolutionary Guards (IRGC) began their crackdown on people protesting against boundary redrawing, killing four and injuring many more.
On May 22, a truckers’ strike over unmet demands for better working conditions and more money began. It is still ongoing.
A teachers’ strike over non-payment of wages has spread across 34 cities, while many more workers are striking in 11 cities over lack of payment.

Support
The Iranian people are incredibly supportive of support from America, like that which they received from Jimmy Carter and his human rights policies when Iran was still ruled by the Shah. They are grateful to the US for increasing sanctions against the entities in Iran that are set up to crush the Iranian people, like Evin Prison in Tehran, which was put on the list for torturing and killing prisoners.
Reza Shafiee, a member of the Foreign Affairs Committee of the National Council of Resistance of Iran (NCRI), wrote: “Although governments have published reports on human rights in Iran, their first priority had always been the nuclear issue with Iran’s regime. The US has taken a different approach in supporting protesters in Iran since the new administration took office last year. It is a major policy shift and will boost the morale of Iranian protesters… Iranian people have made their mind about the Iranian regime long ago. They are fed up with this regime and want to change it. The EU can help by not standing in the way.”