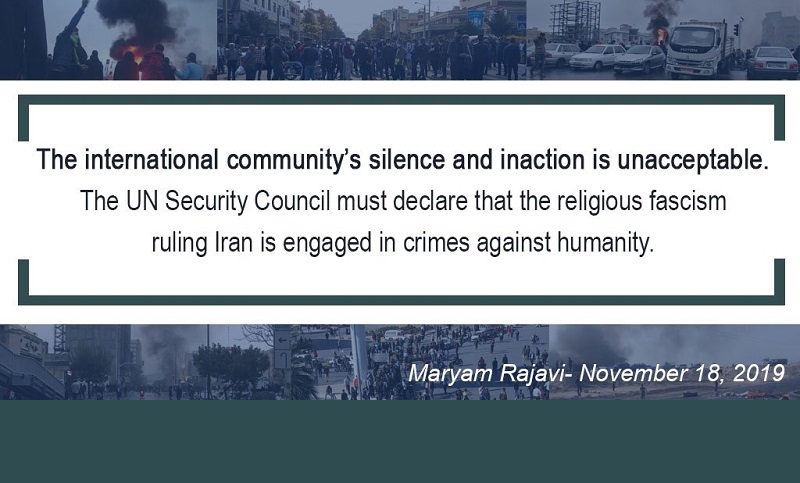 Three women were among the dozens killed during the first three days of the ongoing nationwide protests in Iran, according to the Women’s Committee of the National Council of Resistance of Iran (NCRI).

On Saturday, a 50-year-old woman identified as Mina Sheikhi was shot dead in the Tehran protests and security forces have refused to hand over the body. Sheikhi is originally from Saqqez, Iranian Kurdistan.

Also on Saturday, an unidentified middle-aged woman was shot at point–blank range by anti-riot forces and killed. A video clip of her death is circulating on social media.

So far, the People’s Mojahedin Organization of Iran (PMOI/MEK) has confirmed the deaths of more than 200 protesters in 10 cities, but the actual number is likely much higher.

Maryam Rajavi, the President-elect of the NCRI, offered her condolences to the families of the martyrs of the uprising and called for those responsible to be held accountable.

This is an uprising to end 40 years of dictatorship and terrorism in #Iran. Regime Leaders must face justice for crime against humanity #IranProtestshttps://t.co/i2TCyZsivl pic.twitter.com/GLdVnf7JBI

She said: “The regime’s atrocities during the past three days are undoubtedly a manifest case of crime against humanity. Those responsible have in the past four decades continued to perpetrate crimes against humanity, including 120,000 political executions, and the massacre of 30,000 defenceless prisoners in 1988. This regime must be banished from the international community and [Supreme Leader Ali] Khamenei, [President Hassan] Rouhani, and other regime leaders must face justice for committing crime against humanity.”

Regime atrocities over the past 3 days are undoubtedly a manifest case of crime against humanity. Those responsible have in the past 4 decades perpetrated crimes against humanity, including 120,000 political executions, and the massacre of 30,000 prisoners in 1988. #1988Massacre

Despite the intense crackdown on protesters that was greenlit by Khamenei and Judiciary head Ibrahim Ra’isi, which some say was planned in advance of the fuel prices rises that triggered the uprising, the people have continued to pour into the streets.

On Monday, Germany urged Iran to respect “legitimate’ protests” and warned that Germany was watching the events “with concern”.

Ulrike Demmer, the representative for Chancellor Angela Merkel, said: “It is legitimate and deserving of our respect when people courageously air their economic and political grievances, as is currently happening in Iran. The Iranian government should respond to the current protests with a willingness to engage in dialogue… We urge the government in Tehran to respect freedom of assembly and expression.”

On Sunday, the White House condemned the use of force against protesters and the communications blackout, while also expressing “support” for “the Iranian people in their peaceful protests”.

The statement read: “We condemn the lethal force and severe communications restrictions used against demonstrators.”