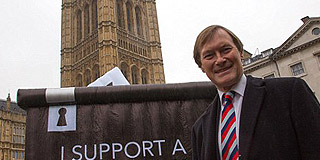 Sir David Amess is the Conservative MP for Southend West in the House of Commons and co-chair of the British Parliamentary Committee for Iran Freedom (BPCIF).

He writes for the Business Insider and is of the opinion that the nuclear deal is a weak deal. It is a step backward and Tehran could have been pressured for more concessions had the negotiators stood their ground.

A bright voice in the dark after the misbegotten nuclear deal, the MP writes that, “Given the weakness of the nuclear deal, the only way we can now guarantee that Iran does not become a nuclear weapon state is if we help to facilitate the end of the government and the national ideology that has Tehran committed to that outcome.”

In light of recent events, and the stubbornness of the Obama Administration to treat Iran as a global threat, there need to be continued efforts to bring down the dictatorial clerical regime in Iran.

He gives credit to the National Council of Resistance of Iran (NCRI). The NCRI, who also revealed the regime’s clandestine nuclear programme, “has its eyes firmly fixed on the ever-growing domestic dissent in the Islamic Republic. It seems continued crackdowns on political activists have failed to put a stop to such calls for broad-based change.”

A regime change is the solution to free the Iranian people from the dictatorship and ensure that a democratic Iran can take shape. Amess has said in his article that it is lamentable that the west has squandered the opportunity to cooperate with the NCRI, led by Mrs. Maryam Rajavi. The NCRI endorses the actions of the Arab coalition and is the only entity standing in the way of Iran’s terrorism.

He also states that there is still hope that US Congress may not endorse President Obama’s agreement with the Iranian President, Rouhani.

There is still hope to reel Iran in and contain its dangerous designs.  He writes that, “Those (nuclear) ambitions remain in place and they remain viable, but the provisions of the nuclear deal mean that Iran will have to work harder to cheat its way to a bomb, or will have to wait ten years or so until it can begin to openly enrich uranium and advance its nuclear programme with the blessing of the global community.”

He has called the deal a failure. But he hopes that the Western policy, toward Iran, will evolve and that policymakers will learn for this. The deal cannot mean that the west will go softer on Iran. The truth is that the nuclear deal does not exclude the possibility of Iran obtaining a nuclear weapon at such a later date. But it does represent an opportunity to eliminate that possibility by making sure that Tehran’s clerical regime no longer exists after another ten years.

The collapse of the clerical regime is not a foregone conclusion. The Iranian Supreme Leader Khamenei backed down on some of his declared “red lines” in the waning days of the nuclear negotiations. To Amess this means that the negotiations could have accomplished so much more, but it also highlights the fact that any retreat on the part of the regime exposes its internal vulnerability.

The regime’s legitimacy can be impacted by such internal threats like the protesting population and the investigations of the NCRI, acting almost as a watchdog.

Lacking legitimacy the regime of the mullahs needs weapons of mass destruction for the sake of their effects on its status in the region, and even more so in light of the growing challenges just outside of its borders.

The MP writes that, “Given the weakness of the nuclear deal, the only way we can now guarantee that Iran does not become a nuclear weapon state is if we help to facilitate the end of the government and the national ideology that has Tehran committed to that outcome.”