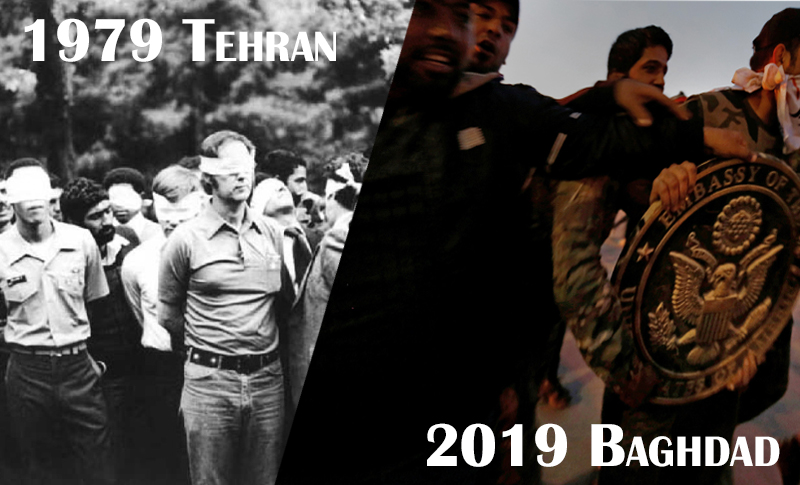 “Iran because of the great leadership of the Shah is an island of stability, in one of the most troubled area of the world,” said former U.S. President Jimmy Carter visiting the Shah in Iran in 1977. A few months later the Shah was overthrown by the Iranian people.

In a rare interview Jimmy Carter recently said: “If I and the rest of the world knew what was going to happen and that Iran would be governed by fundamentalist leaders at the top level, I don’t think that anything that we could have done than going to war.”

“We tried to get long also with the ayatollah Khomeini,” continued Carter but November 1979 and the takeover of the US embassy where fifty-two employees and diplomats were taken hostage for 444 days changed everything.

“I was surprised with what happened and obviously distressed for long time when hostages were taken,” said Carter.

At the time of the Iran hostage crisis, Jimmy Carter called the hostage-taking an act of “blackmail” and the hostages “victims of terrorism and anarchy”. Something that happens until today.

The United States embassy in Tehran was taken over by a group of people calling themselves “Student followers of the line of the Imam.”

In fact, by embracing the hostage-taking under the slogan “America can’t do a thing,” Khomeini rallied support and deflected criticism of his controversial theocratic constitution and suppression of his opponents. His opponents were moderate political forces that included the People’s Mojahedin Organization of Iran (PMOI/MEK). As a result, Iran’s moderate interim Prime Minister Mehdi Bazargan and his cabinet resigned under pressure just days after the takeover. Khomeini tried to mislead the movement of the Iranian revolution, which was aimed at installing a free and democratic republic.

40 years later, we are witnessing the same blackmailing policies of the Iranian regime, this time in Iraq.

The central, southern and eastern provinces of Iraq witnessed many protests against the government in the past three months. Popular protests that were led mostly through social media, began more widely in the beginning of October 2019.

Iraqis are protesting the economic and political situation in the country and demanding freedom, equality and justice. As result of these protests, Prime Minister Adel Abdul Mahdi resigned, and Iraqis are yet to nominate a new Prime Minister.

But on Friday, December 27, 2019, the U.S. military base in western Iraq was hit by a new rocket attack, claimed by Kataib Hezbollah, an Iranian-backed militia group, as the country’s unrest persisted in the wake of the prime minister’s resignation.

Following that, there were US airstrikes against this pro-Iranian militia group in Iraq which led to the death of dozens of members of the groups.

In response, the Iraqi militia groups attacked the U.S embassy on Tuesday, December 31, 2019. The attacks are a response to US airstrikes against an Iran-backed militia that formally sits under the control of Iraq’s Prime Minister.

The Al-Hadath TV reported that Hadi Amiri, the head of the Badr Force, and Qais Hadi Sayed Hasan al-Khazali, the founder and leader of the Special Groups in Iraq lead the attacks against U.S. embassy in Baghdad.

Falih Faisal Fahad Alfayyadh, head of the Mobilization militia Forces, participated in the U.S. embassy attack that led to the entrance of militia forces onto embassy territory. They burned one of the embassy doors and broke boards and security cameras and entrances.

Iran backed militias also wrote on the walls of the embassy that the IRGC Quds Force Commander Qasem Suleimani is their leader.

Reuters reported that the U.S ambassador and other embassy employees left Iraq.

U.S. President Donald Trump tweeted on Tuesday December 31, 2019 “Iran killed an American contractor, wounding many. We strongly responded, and always will. Now Iran is orchestrating an attack on the U.S. Embassy in Iraq. They will be held fully responsible. In addition, we expect Iraq to use its forces to protect the Embassy, and so notified!”

Donald Trump hailed the Iraqi people’s protests and said “To those many millions of people in Iraq who want freedom and who don’t want to be dominated and controlled by Iran, this is your time!”

Former U.S House of Representative Speaker, Newt Gingrich, also reacted in a tweet on Tuesday by saying “The Iranian dictatorship is testing us again and again. They will only stop if we raise the pain level until their very system is endangered. Revolutionary Guard assets should be relentlessly targed until Iran gives up its aggression.”

“When an Iran-backed militia killed an American in Iraq last week, it met with a firm response. Now our embassy in Baghdad—sovereign U.S. territory—has been attacked in yet another reckless escalation. As the President notes, Iran must be held responsible,” tweeted U.S. senator from Arkansas Tom Cotton.

Former U.S. National Security adviser John Bolton said, “The attack on the U.S. embassy in Baghdad is straight from Iran’s playbook in 1979. It’s a sign of Iranian control over Shia militia groups, not a sign of Iraqi anti-Americanism. We must protect our citizens from Iranian belligerence.”

Yes, indeed. Iran’s policy of blackmailing has continued since 1979. The regime tries to mislead Iraqi people’s demonstrations through the same anti-American slogans of 1979 in Iran.

While the Iranian regime is facing major domestic and international challenges, it sees the future not so bright and has no other choice than “exporting the crisis to outside of Iran”.

Iran’s main opposition movement, the MEK, has always pointed out that the regime’s policies for its existence is based on two factors: export of terrorism; hegemonic ambitions beyond their borders, enmity to the West and domestic suppression of all democratic forces – something the regime did in Iran and is trying to carry out in Iraq as well.

Jimmy Carter appeased the Iranian regime for 444 days in Iran’s hostage crisis. Unfortunately, appeasing policies by the west vis-a-vis the terrorist acts of the Iranian regime still continue. Yet, the regime has not changed its behavior or its nature since November 4, 1979. That is why the only right policy toward Iran is to adopt a firm policy that recognizes the democratic aspirations of the Iranian people.